The reoccurring words of 'Give me a sign' in later track 'Lost Somewhere' bring this all together nicely. This Brooklyn duo has obviously suffered with some baffling feelings in the past (like the rest of the population) and they aren't afraid to give them a voice from the internal valves of their fractured hearts. 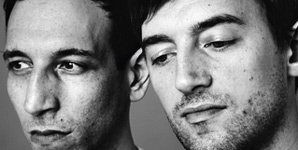 'Mixed Emotions' is exactly what is says on the tin, a large selection of blended noises, tones, words, feelings, sadness, happiness which stalk each other as they try to intertwine. In this case, it's hard to tell whether that is a positive or negative thing. It's either a jumbled cacophony of electo/indie crossover confusion or a cleverly crafted record that's almost of the concept type.

There are some hidden 'highlights.' 'Brothers', is full of charisma in its snappy words' (I'm just the same as I've ever been') and soft synths, overpowered by the unforgiving beat, giving it something of a Gotye influence about it. And that known song of his has gone platinum in most countries in its emotional spiral, so that's certainly a good comparison to be had. There aren't really any anthems in the mix, but 'All Of Me' is the festival track. It's an easy sing and dance along with a steel pan effect giving it a calypso rhythm, ready for the sun. Or, ready to imitate the sun in the boggy field as the rain continues to pour. Other moments of worthy listening happen in, 'Real Life' and 'Green Grass.'

Now for the bad, it's not exactly 'bad' just the mildly disappointing. The tracks are meant to all fit together on paper, but they end up fitting together a little too comfortably. Some start to merge into one with the clappy ditties and drowsy vocal all sitting on edge in the mellow atmosphere. Disjointed and awkward, 'Not The Same' expresses a dragged out and painful vocal. Coming in at around 45 minutes it's not just that vocal is dragged out. Two yawning songs shorter and this album would've been more knitted as a whole.

A big contradictory statement yes, but it's seems to be a tricky task, putting yourself on the 'Do I like Mixed Emotions' scale. Somewhere in the middle sits right. Maybe Jesse Cohen and Eric Ebb are trying to do something cryptic here in this shaken up affair, but it just isn't executed as well as they'd maybe hoped. Though having mixed feelings about this record, maybe they have done a good job!