Watching this gross-out comedy, it's clear that the gifted cast and crew had a great time making it. Scenes are packed with wildly ridiculous improvisation, as the script throws characters into some genuinely outrageous situations. And yet it's never actually funny. The longer the film goes on, the more the audience will wonder why they don't feel in on the joke. 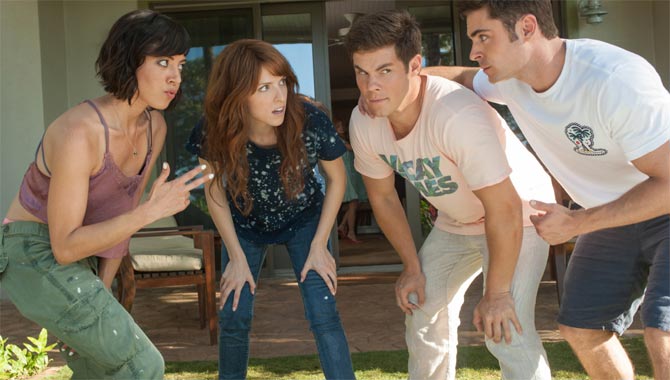 It's loosely based on the true story of chucklehead brothers Mike and Dave (Adam Devine and Zac Efron), whose parents (Stephen Root and Stephanie Faracy) tell them they can't go stag to the wedding of their sister (Sugar Lyn Beard) in Hawaii. They have to find dates to calm down the antics that have ruined family events for years. So Mike and Dave put an ad on Craigslist, and it goes viral, drawing the attention of slacker flatmates Tatiana and Alice (Aubrey Plaza and Anna Kendrick). Pretending to be nice girls, they win over Mike and Dave and head to Hawaii for the big event. But the girls are even more anarchic than the boys. So it's no surprise that a wave of disruptive mayhem follows.

Basically this is a simple coming-of-age story, structured like a standard romantic-comedy that plays out in a series of messy set-pieces. Every beat of the plot is predictable, and the big surprise is that the filmmakers seem terrified of genuine sexuality. Despite using sex and nudity as the (ahem!) butt of most jokes, the film is childish and even prudish. And it doesn't help that virtually all of the gags are obvious and cheap.

Mike and Dave are two brothers who can't help but compete with one another. They're best friends and do everything together, but when it comes to playing a lifelong game of one-upmanship they're both in it to win it. When their sister announces that she's marrying her partner in Hawaii, Mike & Dave's mum and dad are instantly horrified by the possible antics their sons could get up to.

In a bid to calm their potential actions, it's suggested to the boys that they both bring a respectable date to the wedding. Someone they can present to their families and show a completely different - and more mature - side to their personality.

Alice and Tatiana are two girls who could actually rival the brothers and any of their past behaviour, who see Mike & Dave on TV talking about their search for a partner and decide that they're just the girls to accompany the boys to the island wedding.  Their plan is successful but Mike and Dave soon figure out that there's more to the girls than they first thought.

On 14th December 2014, the New York premiere for 'Selma' took place at the Ziegfeld Theatre, with various celebrities and stars of the film gracing the red carpet. Amongst these was Oprah Winfrey, who appears as African-American civil rights activist Annie Lee Cooper. Andre Holland and Jeremy Strong - both of whom also appear in the film - posed on the red carpet as well.

By Rich Cline
Very Good
Exquisitely designed and directed, with finely tuned performances that shine even through some heavy make-up, this true story never quite succeeds in conveying its central relationship. Sure, repression is the point, but passion would have made the film heartbreaking rather than just sad.

John Edgar Hoover (DiCaprio) was only 29 when he became director of the Bureau of Investigation (later the FBI), and he ruled supreme until his death in 1972, holding eight US presidents in the palm of his hand with his notorious files of personal secrets. But he also had loyal friends, including his secretary Helen (Watts) and his right-hand man Clyde (Hammer). As a young man, his mother (Dench) instilled in him a hatred of liberalism and homosexuality, so his enemies included Martin Luther King, Robert Kennedy (Donovan) and himself.

The Men Who Stare At Goats Review

By Rich Cline
Excellent
Based on true events as recounted in the Jon Ronson book, this freewheeling war comedy is deeply entertaining due to the crazy-but-believable premise and wonderfully outrageous characters.

Continue reading: The Men Who Stare At Goats Review 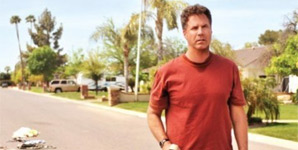