Red Sky July is an interesting prospect; husband and wife team Ally McErlaine (Texas' guitarist) and Shelly Poole (Alisha's Attic) along with Charity Hair and Mark Neary making a proper country record in of all places, Bristol. But surprisingly Red Sky July's eponymous debut conjures up the spirit of the American heartland that it's paying homage to with an effective blend of slide guitars and hazy nostalgia. 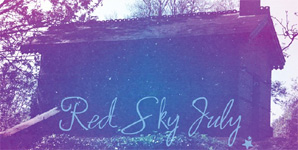 The instrumental 'Hymek' opens the record with a short improvised jam that sounds like the band tuning up. The guitars are bathed in echo bringing to mind a far away place, and although it may seem odd to set the scene with something that sounds like an outtake, there's an obvious reason to do so. It removes any expectations based on the band members' previous work and indicates that the album was recorded live. There's a laid back feeling to the way the instruments interact here which prevails on the subsequent 11 songs.

The next surprise is how well suited Poole and Hair's multi-tracked vocals are on 'Morning Song'. McErlaine is left to play to his strengths with a series of catchy guitar parts, but it's the ladies that sit front and centre delivering the heartbroken lyrics. It's a theme that continues with the venom of a jilted lover on 'Already Gone'; "Your noble truth is nothing more than air, you've run out of luck, and I kind of get a pleasure from your pain."

While the instrumentation throughout is impressive, with acoustic and electric guitars punctuated by violins, banjos and piano, at its heart 'Red Sky July' is a very traditional country record. There's nothing wrong with that of course, but because it's paying homage, rather than trying to tread new ground, the record has a tendency to feel familiar before you've even listened to it all the way through. It's worth persevering though because the stand out track is tucked away at the very end. 'The Happiest Girl In The Whole USA' is a tender and quiet inner monologue of domesticity and love, which sounds both world weary and celebratory.

'Red Sky July' is ultimately a hidden treasure, which is by no means perfect, but will strike a chord with many listeners. It's an achievement for what is essentially a British band to so faithfully create a very American record. While the album is firmly aimed at a country audience, it's also understandable that it's received some mainstream airplay on Radio 2. For musicians that were knocking on the door of the top 40 in their youth, they're now producing some of their finest work after the glare of the media spotlight has passed by.