Review of I Can Destroy Album by Paul Gilbert

American guitar virtuoso Paul Gilbert's latest studio album, the 13 track "I Can Destroy", was released in Japan in December, 2015. Fans of rock and roll in the rest of the world endured a seven month waiting period, but the eventual reveal was glorious. 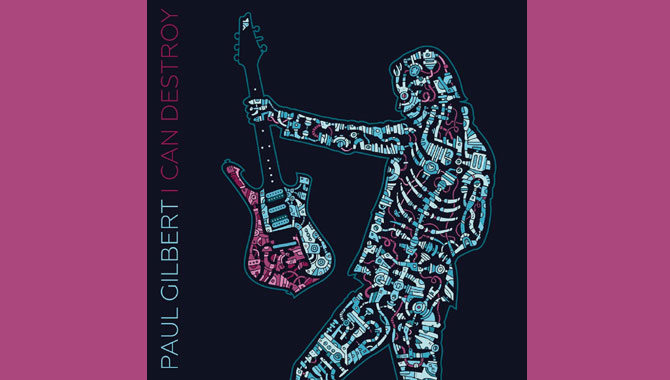 "I Can Destroy" serves as both an uptempo celebration of Gilbert's 40th continuous year as a guitar player, and a tour de force through a variety of subgenres of rock music. Paint-peeling, face-melting classic heavy metal overtones in "I Can Destroy" give way shortly to progressive jazz fusion leanings in "One Woman Too Many", to early proto rock stylings of "Gonna Make You Love Me". Southern rock with countrified slide guitar overtones pepper "Woman Stop", and the catchy, raunchy southern tradition carries forward into "Adventure And Trouble". Classic radio rock gets a virtuoso upgrade during the cover of Ted Nugent's "Great White Buffalo". This is a rich journey through guitar tone, texture, and colour, an intense album for deep listeners. Those who know about top loading (that the best might not come first) know to seek the hidden gems, like the smooth, melodic stinger, "Adventure and Trouble".

Relevant and engaging "I Can Destroy" offers a lot to a listener, with meticulously rehearsed and layered three part guitar harmonies, three part vocal harmonies, vocalist switching, key modulation, syncopation, tempo shifts, superlative musical chops, and flash in abundance. The heart of the melodic album is upbeat, timeless rock and roll, with prominent blues overtones. The band is well-rehearsed, tight, and crisp. Musicianship on the album is top quality throughout.

Gilbert experiments with vocal effects and dynamics, and seems to be more open to utilizing his unpretentious, confident voice as a primary instrument. He's put some effort into developing engaging lyrics, as well as emotive delivery, all to serve the songs. Vocalist and guitarist Freddie Nelson makes his recorded return, offering lead and background vocals as well as co-lead and rhythm guitar. Unlike his 2008 collaboration with Gilbert, "United States", Nelson makes no effort to be the 'one and only' lead vocalist. Here, he matches his range and reach to Gilbert's, a subtle underscore to the overarching goal that this is a full band effort, an edification of rock and guitar. Nelson's most obvious contribution is "Gonna Make You Love Me". Vocalist and guitarist Tony Spinner also makes a recorded return to Gilbert's fold, and is prominently featured on several songs, including "Blues Just Saving My Life". Drummer Thomas Lang, an alumnus from Gilbert's "Vibrato" album cycle, and fresh face, bassist Kevin Chown shine throughout, adding muscle, groove, and burl where needed.

Thankfully, producer and engineer Kevin Shirley did not 'brick wall' the album; instruments have plenty of depth and clarity within the mix. The audio engineering job is crisp and modern, so even after undergoing typical drastic digital compression for streaming, the music doesn't lose its finer dynamics. A true stereo mix is enjoyable and used to its full advantage, like when drum patterns hardpan from left to right, or when one guitarist plays a solo on one side, with a dual rhythm guitar line fed to the other side.

Lyrical themes seem to explore a limited but time-honored range: friendships, relationships, loneliness, love, and loss. Not as downtrodden as grunge, nor as ebullient as glam rock - "I Can Destroy"'s refreshing honesty and deep introspection fits somewhere in between. Like country greats Waylon Jennings and Johnny Cash had occasion to pen, Gilbert's lyrics (prominently during "Woman Stop") can be a little sexist or "traditional conservative", but some might forgive that as this is a guitarist's solo record, not a folk singer-songwriter's protest. This is rock and roll! It has no obligation to be pretty, comformist, or politically appeasing. There are plenty of thoughtful, meaningful, and even profound passages to smooth the road, especially during the disc's lyrical high point "Make It (If We Try)", which is brilliantly sequenced on the heels of "Blues Just Saving My Life". Coupled with a positive tone and peppy tempo, the emergence from depression, a creative blockade, or a low point in life is expressed with elegance. "All the things that I own, don't help me get over this feeling. But it don't take very long to see, that my friends are watching over me. I see the sun begin to shine. We just might make it, if we try." Ample humour and irony peek in throughout, from opener "Everybody Use Your Goddamn Turn Signal" to "Love We Had".

No breaks, no holidays, no mediocrity, no compromise: the "Godfather of Shred"-turned blues rock aficionado-Gilbert, with his band of fellow monster players, proves he is not letting up any time soon. This "greatest hits of notes" disc both upholds and adds to a strong, sizeable, and creative sonic oeuvre. One lead foot on the gas, one hand undoubtedly on the blinker lever, "I Can Destroy" is Gilbert's haulin' ass, manifesto-slash-offering to any fan of rock music done well.