Review of Welcome, Stranger! Album by The Blue Aeroplanes

Despite their thirty-five-year existence, you'd be excused for having been a complete stranger to art-rock Bristolians, The Blue Aeroplanes. Over the decades, they've garnered a devoted fan base, a secret society that gawps incredulously if you claim you've managed to detect the band's existence too. They are the elusive Higgs boson particle of the indie world. This, their twelfth album, comes out on January 6th; if you're not a die-hard, attending the annual sell-out Yuletide shindig at Bristol's Fleece (the independent venue that they own and run), you can get to know them better on their national tour in January. You may also get to meet the band's dancer Wojtek, the Polish Bez. 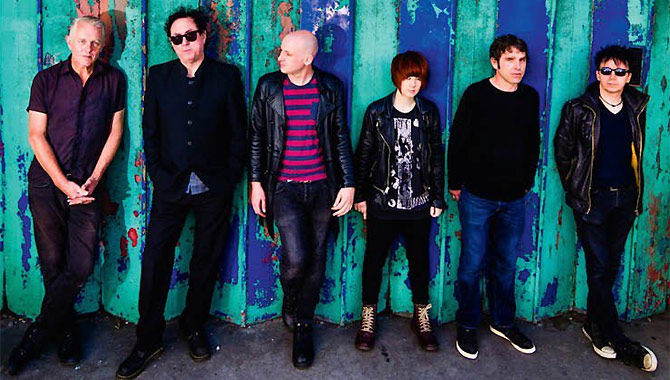 'Welcome, Stranger!' may sound inclusive as a title, but the lyrical absurdity and abstraction may disorient an unwitting drifter into the Aeroplanes' airspace, with songs about Elvis impersonation, map reading or dead trees blatantly yanking commercialism's chain. Its fundamental whimsy, however, proves an endearing strength, its underlying positivity also keeping it refreshing. Front man Gerard Langley's speak-singing will always divide opinion, but let's not pretend that approach ever marred Laurie Anderson or Lou Reed's critical reception.

'Elvis Festival' starts with solo drums, then power chords interspersed with thumping cowbell donks. It celebrates eccentricity, inclusivity and acceptance ("You sing, badly,/ But you are Elvis./ They'll exempt you, gladly,/ For you are Elvis."). The recurring guitar riff from 'Here is the Heart of All Wild Things' (which champions bravery in the face of the unknown or unpredictable) could so easily be off Radiohead's 'A Moon-shaped Pool'. The song ends with a barrage of distorted 1991 Wedding Present 'Seamonsters' guitars. 'Nothing Will Ever Happen In The Future' reminds you to seize the day and "Put your own house in order,/ Or someone else will do it for you," with a Neil Young guitar line and a refrain that nostalgically invokes the BBC theme for 'The Hitchhiker's Guide to the Galaxy'. Conversely, 'Sweet Like Chocolate' is a tad syrupy once its AC/DC intro has elapsed, and 'Skin' and 'Poetland' feel rather like ballast.

Langley sums up their output as, "always a bit of a party, with some intellectual sh*t thrown in." As 'art-rock', this album throws more focus on the textured rock sound that having three guitarists brings, and less on the arty allusions you can find in previous works (setting Plath's "The Applicant" to music on 'Swagger'). There's a fresh, live sound to what they have recorded, frequently sounding like REM on 'Mirror' or 'Document'. No wonder Michael Stipe is their #1 superfan.