Following a £25Million investment, Dreamland Amusement Park re-launched over bank holiday weekend to the delight of the many who passed through the gates. With new rides, a new layout, new bars and a new stage to boot the heritage theme park looked resplendent in the summer sun. 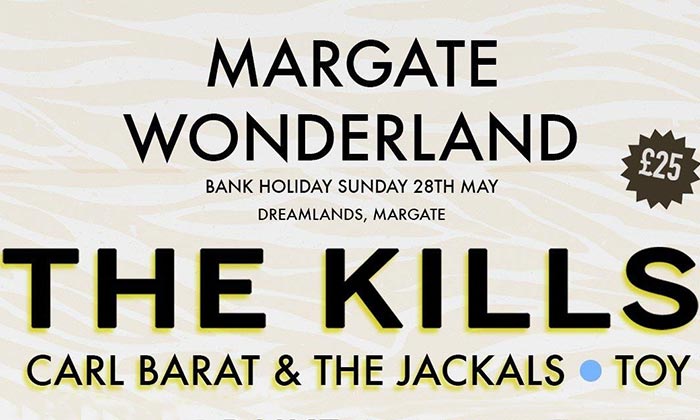 To help celebrate the re-launch Hackney Wonderland teamed up with Dreamland for a brand new event of their own. After three very successful years entertaining the North-East London crowds the organisers have branched out and come to the seaside to present Margate Wonderland. It's a very similar line-up and both events act to book-end the summer season. Rather like a twinning of towns, Hackney and Margate, Dreamland and Wonderland; it's all a very nice fit.

Margate Wonderland's one day festival took place over two stages, The Hall By The Sea and The Roller Disco. Scanners over in the shabby chic of the Roller Disco provided our first musical entertainment. After getting to the park early, riding the oldest roller coaster in the UK, The Scenic Railway, and possibly sampling far too many of the foodie delights out in the glorious sunshine we were in need of a diversion from all-the-fun-of-the-fair. Scanners didn't disappoint, delivering up a great take on 2010's xylophone enhanced 'Baby Blue'; "For all the babies that are little". 'Salvation' rang out, complete with false ending, like a song on steroids before 'Changing Times', the first song Sarah from the band recorded with Mat. The slower, softer start gave way to a riotous racket of scuzzy guitar and thunderous bass providing a great start to our Wonderland experience.

Over in The Hall By The Sea, and in between party political broadcasting that was not necessarily in favour of retaining a Tory lead government, a funkier groove was being laid down by Warrington's The Man & The Echo. With a disco undercurrent spliced with a Northern Soul vibe and a set of acutely observed lyrics the band were in a playful mood. They closed out their set with their second single from last years, very well received, eponymous debut. 'Operation Margarine'; a hybrid of Style Council chic and Divine Comedy wit.

The Hall was also home to some of the heaviest performances of the day prior to the headline act. Local band, from Canterbury, Broken Hands and before them, Electric Child House, both took to the stage with more hair than a wig factory floor and brought with them (so to speak) another of the late afternoon's, unbilled, performers. As the bands rocked out at full tilt blasting out their blend of cacophonous noise we were also treated to a stand-alone dance performance from a man surely not of his time. Looking like a teleport from '73 donned in the finest brown flairs, short sleeve brown stripped shirt, replete with German porno 'tash and a fine 70's curtain cut he was front of stage exorcising his demons with his own St Vitus Dance. Very entertaining it was too.

Walking between performance areas we had to double take a couple of times as at first a giant sized, cartoon like, Elvis in Tweenies shoes strolled by and then a mermaid on a bed of foil was pushed past on a shopping trolley. (This is Dreamland after all)

Howling Bells over in the Roller Disco provided my biggest awakening of the weekend. Having passed largely under my musical radar for years it was with great pleasure that I finely caught them live. The Sydney four piece headed up by Juanita Stein had a far more balanced sound than that of the previous two bands. They played out a fantastic set that included a wonderful version of 'Setting Sun', a Country tinged 'Broken Bones' and a couple of tracks from their second album 'Radio Wars'. Firstly 'Cities Burning Down', with its revolving guitar hook and bubbling bass, and then 'Digital Hearts'. The latter was played through as a large inflatable fur ball, won at one of the amusement stalls, was thrown around above everyone's heads and at one point landed in front of the band..."can I have my ball back" came the jocular shout from the crowd. (I'm not so sure the band found it so hilarious!) They closed out with new and old. Brand new track, 'Blood On Your Lips', was followed by the brooding brilliance of a song from their first album, 'The Night Is Young'.

The Duke Spirit headed up the The Kills over in The Hall By The Sea, despite no sound check earlier in the day due to power issues. Liela Moss and the boys shouldn't have apologised about the lack of prep, the set went down a treat with Liela's vocal sounding particularly fine. 'The Step And The Walk' with it's fantastic bass line and anthemic chorus sounded great in the big hall. 'Hello To The Floor' was played out in its full glory, underscoring the sense of brooding menace just below the surface of the gig throughout. Liela accessorised songs with tambourines and harmonicas as the lights bathed the crowds in a purple glow. A new song "no shit", 'Who Knows Where The Time Goes' set up a great finale that included fan favourites 'Dog Roses' and a fabulously filthy sounding 'Serenade'.

Toy, ironically possibly, were not in a playful mood, they were taking it all very seriously in The Roller Disco entering into no repartee with the crowd. They played hard and heavy, only Tom's guitar harked back to his penchant for a Felt like delivery just as it did when he used to perform with his sister, Rose Elinor. 'Jungle Games', 'Dream Orchestra' and 'Another Dimension' from last years third album 'Clear Shot' were given a raucous airing before the closer, aptly, 'Join The Dots', The songs at times were a little over indulged and verged on prog as they rose to release magnificent crescendos backed by some impressive percussion courtesy of Charlie Savidge.

A swift exit saw us take a walk up the slope to the Hall By The Sea for the final time this weekend in time to catch the headline act that most of the crowds had come to see. The Kills played out an unrivalled sixteen song set in a blistering performance that blew all before them away. Alison Mosshart took to the stage like a caged animal prowling her territory. There was no doubt that she and Jamie owned that stage. In an unmissable show Alison cavorted like a feral dervish from the set opener, 'Heart Of A Dog', right through to the subdued come down of 'Monkey 23'. 'U R A Fever' preceded 'Kissy Kissy' as Alison too donned guitar; played with unrelenting, venomous intent. Two tracks from last year’s superb album, 'Ash And Ice', were split by 2009's 'Black Balloon', The fabulous 'Impossible Tracks' and a magnificently sinister sounding, 'Doing It To Death', were both set highlights. Mosshart stared wildly into the crowd, looking like a blood thirsty predatory cat, as she started 'Baby Says'. 'Dead Road 7' and 'Echo Home' slowed the pace but were no less well received; the whole performance was tight and succinct, barely losing it's build or momentum. Jamie was every bit the showman too, his guitar work a sublime demonstration of skill and dexterity. The killer riffs of 'Love Is A Deserter' sounded awesome in the hall before two more choice cuts, 'Siberian Nights' and 'Whirling Eye', from last years album, raised the roof. The Kills were worth the entry alone; their performance was a joy to behold. Alison Mosshart must be one of, if not the, most breathtakingly brilliant front women performing at the moment, she was just incredible to watch and to hear, the whole set was like a fireball of passion.

Wonderland's trip to the sea was a huge success for Dreamland and for Margate. The headliners are a must see act and there was plenty in the supporting line-up to make the whole event very entertaining, let’s hope it becomes an annual event just as it has in Hackney. I'm only disappointed I didn't get to meet Alice!