Kai Whiston is a rising UK producer whose signature style is defined by erratic, freaking-out beats that are akin to chemicals having haywire reactions in a lab. Across records such as later year's 'Houndstooth' EP, 'Threads & Strings/Rubens' as well as the 'Broody' track earlier this year, Whiston has displayed an ability to create music that's maddening, but you can often dance to it, in how much swing is in the beats. Whiston has only gotten better with each release and things are no different here with his newest EP 'Fissure Price.' 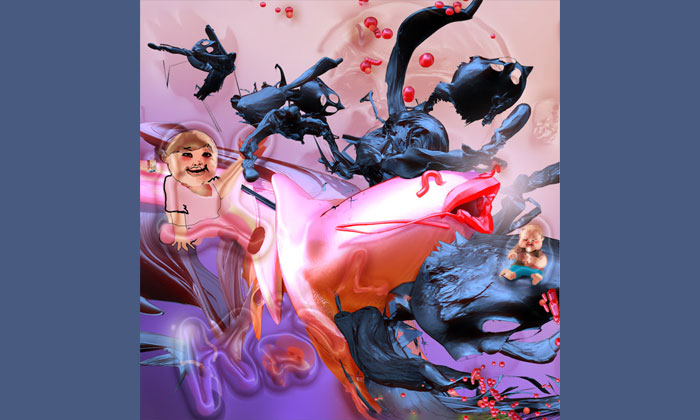 'Pushchair' opens this thing up with bizarre noises that include what sounds like a whistle, but warped into a screech. They're quickly married with some more glacial trickles. This track features some really unsettling soundscapes, that are akin to a spider crawling around in your room, but darting away when it thinks it's going to be squashed. The way the menacing parts take over, but the pretty beats have a strong presence within it all, makes for an otherworldly effect.

For 'Vein Cloak', again, things are very warped and jumpy, yet there's such a fine layer of ethereal beauty that it feels like a movie where the protagonist has discovered a new realm with all kinds of frightening creatures, but they're friendly and cute upon further inspection.

'Erroll' pulls us out of fantasyland a little and demonstrates Whiston's dancefloor firepower with pounding beats that are bound to make people stomp at his shows. However, the way they're squeezed, flickering and ghostly maintains the strange.

'Throat Behaviour' features surreal stop/start approach in the main beat whilst squishing textures layer over the top. As the track gets more minimal with the rubberier beats slowly leaving, the track transcends into something more cathartic, as if you've just done a massive workout and are catching your breath.

'Icarus' has warm, airy textures that are akin to the sea slowly coming up on a night and Buchanan's tranquilising, slow-paced vocals help reinforce the track's sunset-like atmosphere. However, even here Whiston can't resist throwing some twitching madness in the distant background.

'Den' closes 'Fissure Price' with the most meditative and peaceful track on the record and perhaps it's called 'Den' because it feels like you're in your own little world here, just like when you made a den as a kid. The high-pitched vocal snippets as well as the rising fuzzing are what really make this song simultaneously comforting and intense. Just like every track on this record, Whiston manages to marry beauty and suspense to stunning effect.

This is a very impressive EP. Whiston manages to take you on such a journey across the 6 tracks/22 minutes here that the only real complaint to be made is that this isn't longer. With that being said it makes you salivate at the thought of what Whiston may be able to achieve when it comes to a full length in the future. This is a record for oddballs, this is a record with meditative power and it's a record that can and will get people moving.