Chances are, if you heard Eskimo Callboy two years prior to the release of 'Crystals', you more than likely wrote them off as a parody band that you couldn't take too seriously. You probably assumed that the Germen sextet was in it for the 'wow factor', to catch people off guard with their seriously random - and sometimes hilariously confusing - lyrics (see 'Muffin Purper-Gurk' from the album 'Bury Me in Vegas'). Looking back, they probably didn't take themselves too seriously, either. 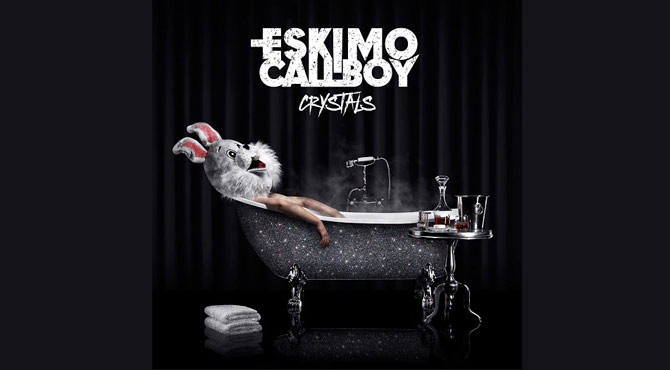 With the 2015 release of 'Crystals', however, Eskimo Callboy has stepped up their game quite a bit. Don't be fooled, though; they haven't completely gotten rid of their signature lyrical antics. It's safe to say that in their first two albums, Eskimo Callboy were infatuated with the stereotypical 'rock n' roll' lifestyle, whereas on 'Crystals', their focus leans more towards the consequences and addiction that stemmed from their previous days of reckless partying. The amount of maturing Eskimo Callboy convey through 'Crystals' is amazing, although their execution is sloppy, the 'growing up' factor is unmatched to anything they have released in the past. Their original sound has been revamped so much so, that the band can really put that emotional, personal feel on this album that so many Eskimo Callboy fans have been looking for as they mature and grow.

With that being said, Eskimo Callboy haven't given up their old ways completely with 'Crystals'. The track 'Pitch Blease' really shows that. The zealot fans of Eskimo Callboy will definitely breathe a sigh of relief when they hear this track, but for most listeners, it takes away from the overall quality and feel of the album.

Overall, the heavy moments that Eskimo Callboy provide on 'Crystals' are not as strong as when they stick to their melodic, electronicore sound. The danceable beats and melodic repetition of 'Crystals' definitely appeal to pop fans, if they don't mind the melodic metalcore feel the album is based on.

Although 'Crystals' is the best album Eskimo Callboy have released so far, it is by far not the best they have to offer the airwaves. We can hope to expect a more perfected sound, better execution, and the same fun-loving, 'why so serious?' antics we have learned to expect and embrace (most of the time) from Eskimo Callboy.