This reunion of actor Mark Wahlberg and director Peter Berg feels like a natural successor to their previous collaboration Lone Survivor, another true story adapted into a movie that wallows in both heroism and violence. This film recounts the events of April 2010, when a drilling rig off the coast of Louisiana exploded, creating the biggest oil-spill in US history. It's the story of the people who were working there, and while there's a clear attempt to honour the memory of the 11 men who died that night, the cast and crew also want to create an entertaining action-disaster movie. 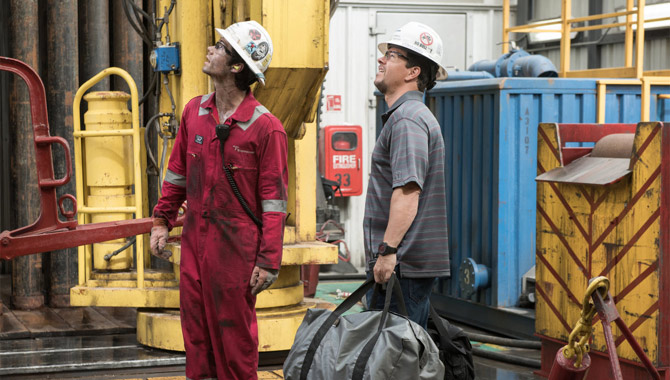 Wahlberg plays Mike, the chief technician on the Deepwater Horizon, an oil platform more than a half-hour flight from land. As the film opens, he kisses his wife (Kate Hudson) and daughter goodbye and heads off for a three-week shift alongside boss Jimmy (Kurt Russell), drilling foreman Jason (Ethan Suplee) and pilot Andrea (Gina Rodriguez). When some discrepancies delay their work, Mike finds himself under pressure from the corporate boss (John Malkovich) to get on with the work and get back on schedule. Under order to ignore some questionable safety tests, they carry on drilling until the well erupts, triggering a massive ball of flame.

After the increasingly tense build-up, the movie becomes a more traditional disaster movie, as characters run for their lives or dive into the inferno to save someone. Some of this is cleverly conceived and played out, including several striking set-pieces. But the main focus here is on rah-rah courage. The most heroic roles go to Wahlberg, Russell, O'Brien (as a driller) and Kirkpatrick (as a crane operator). While Malkovich chomps deliciously and villainously on the scenery. But the most engaging role goes to Rodriguez as a woman who is genuinely terrified about what's happening but still manages to do her job. She's the only person on-screen who feels like a real person, and the irony isn't lost that she's also the only woman among this crew of macho tough guys.

Continue reading: World War Z: How 2013's Most Ambitious Movie Got Made (Trailer)