Review of MDNA Album by Madonna

Evidence, if it were needed, that pop will indeed eat itself, Madonna's latest album MDNA (her first studio album since 2008) is self-referential mix of her own material, in its various stages. It plays out like a lovelorn has-been recalling her glory days but always several steps away from emulating or recreating them. With 'Girl Gone Wild,' MDNA begins with Madonna reverting to her fall-back position; taunting organised religion. It sets the tone for the album, giving way into a pithy Euro-pop dance track. 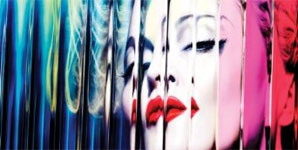 'Girl Gone Wild' starts with Madonna eliciting a breathy, quasi-serious prayer for forgiveness, calling on the personal struggle with Catholicism that has permeated so much of her work since she first started out. She does the same with 'I'm A Sinner', spelling out the message that she used to convey so well without holding up an enormous, luminous signpost labelled 'Controversy.' "I'm a sinner, I like it that way," she sings, in a manner that suggests that perhaps she isn't really much of a sinner any more but remembers that her sinful ways have shifted units in the past, so she should probably try to keep the pretence for as long as possible.

Equally, on 'I'm Addicted,' she makes a point of making of point of what we had already figured out, without those luminous signposts: MDNA. Some of the letters of her name. Sounds a bit like the very illegal party drug MDMA. Drugs are addictive. There's the link. Admittedly, Ms Ciccone has never been the most subtle of artists but the majority of the lyrical content of MDNA is akin to a small child screaming 'look at me, look at me,' vying for attention whilst mummy shops for groceries. The most cringe-worthy example comes in when she switches from 'edgy, swearing b*tch' mode' (see 'Gang Bang') to the diluted subservience of 'Superstar,' with the sample lyric "you can have the password to my phone, I'll give you a massage when you get home." Given that she's had four years to come up with the material, you'd think she may have looked further than her daughter's diary for reference points.

Madonna had a number of producers involved in MDNA, though there seems to be little differentiation between the tracks. Often, they seem to consist of the same core material, with a variety of synths layered over the top, varying from 'attempted dance floor anthem' to the more ethereal productions from William Orbit which have a tendency to sound like they were scraped from the cutting room floor when she made 'Ray of Light.' At times, it sounds as though the last ten years never happened. It's painfully obvious that Madonna is aiming to give the impression that she's at the cutting edge of modern pop music but at times, it's more Aqua than Ke$ha, like she's gotten her terms of reference muddled along the way.

There are a couple of 'saving grace' moments on MDNA; 'Masterpiece' sees her stripping back the pretension and singing something vaguely meaningful, rather than serving up a monotonous dance beat, covered with assertions about what a naughty girl she is. And of course, the single 'Give Me All Your Luvin,' which actually showcases Madonna at her finest and her shrewdest. Self-referential works here; dressing Nicki Minaj and M.I.A. up as your cheerleaders? Few could deny that that was smart way of pointing out that you're still one step ahead of the game. It was a powerful message because it fooled a fair few of us into thinking that might actually be the case. Unfortunately, the rest of MDNA serves as a painful reminder that she's lost sight of herself as an artist and surely only her most devoted of fans could deny that she's dropped the ball here.