Tommy Morris is an expert golfer who learned the sport from his father; the greens-keeper at The Royal and Ancient Golf Club of St Andrews and a club maker by occupation. Despite Tommy's skill, he is still dismissed by club members for his own social standing. Not content with career prospects as a caddy, however, Tommy invites townsfolk to watch him play on his own green and soon becomes a local legend. His father is less pleased about this. A man who prides himself on knowing his place in the hierarchy, he is embarrassed by Tommy's insistence at defying unwritten social rules which comes to a head when he falls in love with a woman a class below him.

From director Jason Connery come The Philly Kid, a tale of corruption, murder and professional fighting. Dillon McCabe (Chatham) is the titular Philly Kid who, on the same night he was crowned an NCAA wrestling champion, becomes involved in the killing of a police officer. He is sentenced to fifteen years in prison, enough time to contemplate his actions and vow not to fight again. Ten years on and Dillon is paroled back onto the streets on New Orleans, returning to his run-down Baton Rouge neighbourhood. 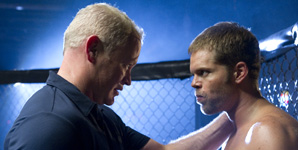