Fans: Iron Maiden have them. There's the 3,867,811 of them on Facebook for a start (That's almost twice the number of those giving it up for those whippersnappers the Arctic Monkeys), whilst in the course of promoting their 85 million and counting global album sales they appear to have played live in front of one in three people who live on the continent of South America. 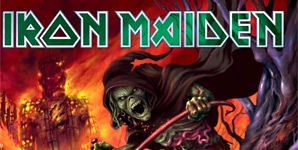 All of this seems utterly remarkable given that for most of the past three decades the band have been subject to a selective media ambivalence which may have broken many other outfits; this is perhaps because whilst their pervasive influence on thrash was openly acknowledged by the likes of Lars Ulrich and Kerry King, the godfathers themselves have remained as resolutely heavy metal as leather and dandruff itself.

Proudly unfashionable for decades, this is the same heavy metal which has enjoyed something of a renaissance in Britain recently, helping their most recent outing, last year's The Final Frontier, to the top of the album charts - the band's first time at that apex in nearly twenty years. Hard on the heels of this and the compilation of their selected output during the eighties Somewhere Back In Time, From Fear To Eternity brings the Maiden back catalogue up to date, with material criss-crossing their last eight studio albums and also the last two decades.

A double CD with their perennial mascot Eddie leering from the cover and clocking in at a brain-frying duration of 148 minutes, those millions of fans will unquestionably love it. One of the main reasons that Maiden have achieved such longevity has been a willingness not to stray too far from their own orthodoxy - Bruce Dickinson's solo ventures did enough of that - but whilst they've frequently been accused of being formulaic, it's always been a recipe that has the power to thrill without taking liberties.

The contents therefore are as you would expect, full of Dickinson's powerful, sub operatic vocals (Totally full in fact, as the songs originally recorded with former Wolfsbane singer Blaze Bayley are presented as fire-free live versions), with riffage of all shapes, volumes, speeds and sizes and also guitar solos at multiple dazzling levels of virtuosity. Singling anything out from a collection of homogeneous quality is almost pointless, but the epic Fear Of The Dark, the generally misunderstood Bring Your Daughter..To The Slaughter along with the razor sharp ass-kickery of The Wicker Man all deserve even the uninitiated's attention.

These none believers may point to some of the imagery used and lyrical themes occasionally referencing the occult as evidence of why the likes of Iron Maiden - and metal itself - should be considered A BAD INFLUENCE ON OUR CHILDREN, but whilst there's plenty of costume blood and gore, there's also just criticism of the excesses of organised religion (Holy Smoke) and global capitalism (Be Quick or Be Dead) to help prove that an insightful conscience is also at work.

If there is negativity to be had, it's that Dickinson's voice occasionally rises to a squawk reminiscent of a giant seagull in spandex, and although it only happens mercifully once, there is a unwanted lapse into the realms of Spinal Tap during the cliche-fulfilling Dance of Death.

This in context is a slightly trivial complaint, bearing in mind that the protagonists have always maintained listeners consider their work with a sense of humour on hand. And if you can get past the fact that From Fear To Eternity is essentially a compilation which is unlikely to appeal to people outside of Maiden's (Very, very wide) circle of devotees, it's brilliant fun, something to air guitar to on quiet afternoons in the office and equally is preposterously overblown enough to illustrate that it's not to be taken too seriously. So go on. Don't be afraid to dangle your toes in these murky waters, and we almost guarantee you afterwards you'll make it 3,867,112.