Odd Future's rise to super-stardom has been watched by millions online, and has translated into real die hard fans, and a movement whose power is undeniable. Earl Sweatshirt's third album, 'I Don't Like S**t, I Don't Go Outside' is the follow up to the hugely well received 'Doris', released back in 2013. With a cohesive style, atmospheric production and a unique, charismatic delivery, Earl Sweatshirt is one of the leading spitters of the new generation, and with two dope projects under his belt already, his third album is surely set to continue the trend. 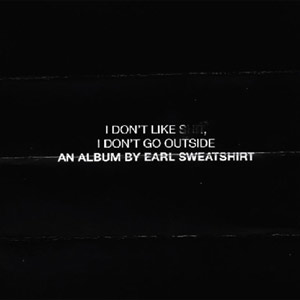 The slow paced, jazzy opening track 'Huey' shows off Earl's humour as well as an insight into his thinking and mood, which is reflected through much of the album's musical characteristics, along with the title. His smooth flow and rhyming style is also clearly evident from the word go, and is executed in excellent fashion. This continues in 'Mantra', where Earl picks up on the aggressive side of the spectrum, with a confident delivery over a spare instrumental with reverb drenched drums. 'Faucet', another tune with a slow tempo and minimal instrumentation, again allows Earl to deliver heartfelt lyrics about his relationship with his mother, a subject that has been well documented by the media, and his honest, humble tackling of this on here makes for a real stand-out.

The haunting, stoned out feel of 'Off Top', along with Earl's consistent, intricately structured flow and brilliant writing, make this another highlight. At only 1 minute 47 seconds, it's the shortest cut on the album, and yet concisely delivered. 'AM // Radio', which features Wiki of New York based trio Ratking, is another solid track, with a stylistic clash that really works. Wiki's unorthodox rhyming patterns and delivery next to Earl's continuous, smooth flow is a combination that comes across very successfully over a textured instrumental that keeps the ears guessing. The album closes out with 'Wool', featuring a regular Earl collaborator and one of my favourite MCs on the circuit at the moment, Long Beach California rapper Vince Staples. The gritty beat with loud, crunchy kicks and snare drums backs the two savage MCs slaying the beat in tremendous fashion; closing out an album that feels immensely personal with a punchline riddled track like this is a dope move, and Earl pulls it off sublimely.

Earl Sweatshirt sounds comfortable and mature on 'I Don't Like S**t, I Don't Go Outside', and his raw style with a high energy sounds at home over these deep, often sparse and always moody instrumentals. With production handled almost entirely by Earl himself, with only 'Off Top' being produced by Left Brain, the cohesive, atmospheric, edgy sound runs throughout the album, making for a real experience when listening to the project in its entirety. At only half an hour long, the album is short and concise, and Earl certainly makes the most of this.

I Don't Like S**t, I Don't Go Outside: An Album by Earl Sweatshirt