With a title like 'Sideways, Sometimes' and a third of the songs on here not even having a proper name ('Untitled #1', 'Untitled #2' and 'Untitled #3), it all feels very wonky and uncertain. Though maybe it's because Cymbals recorded their follow-up to last year's 'Unlearn' on a boat. Yes, that's correct the record was all finished up in five days aboard 'Lightship 95.' Maybe the boat's inability to stay still and unsteady posture had something to do with Cymbals' music being 'Sometimes, Sideways' and not always conventionally rigid. 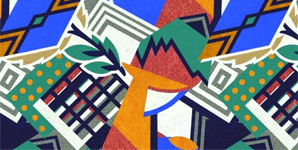 Forget the odd angles and the potential seasickness, there's something about this disjointed affair that will just leave you unintentionally bopping along. The London band have that funky sound that sits itself in a sunny region with the likes of Theme Park, Friendly Fires and anything with a groove really. 'No Bad Decisions' uses the voice as an additional instrument. The sharp 'huh' makes it sound like even singer Jack Cleverly is surprised about his band's ability to create a decent slice of indie joy. This 8-track record is noticeably cleaner than their other works. It's not focused around the production nor is it as try hard. It's quite minimalistic; you can hear every instrument's purpose on the track. There are no added effects to try and sound 'hip', the high vocal tone, simple drum patterns and general laid-back approach assure that anyway.

'Candy Bar' is a particularly good song. It's got a neatly molded backing and quirky words, 'Come and share my candy bar' (innuendo anyone?) This combination of words and sound draw comparisons to Baxter Dury's latest venture 'Happy Soup.' This quieter sound is a good progression from previous songs, 'Summer Escaping' and 'Totally Over.' It's obviously still Cymbals but it's taken a lengthy step forward, which is something not seen every often from a band still in their early stages. First listen complete and it turns out that this 'Untitled' trio isn't just the four-piece trying to be 'cool' or alternatively running out of time for song names before their time in the studio was up. It does have some strange need, the three instrumental songs are separated out and act as the 'ambient gel' that holds 'Sideways, Sometimes' together.

They've just got off tour with The Temper Trap, and believe me Cymbals' live set is a whole different way of life compared to the album. There's so much energy and all the sounds come together as well as they do in the studio, but louder. Cymbals have shown they are capable of moving forward and won't just be sticking to the same formula when writing their next one. Just one last question... where will they record next time? Water/Earth/Fire/Air? Place your bets.