Back in the day, before the likes of Outkast, Eminem, Kanye and Jay-Z succeeded in extending their appeal beyond hip hop's traditional fan base, before producers like Timbaland, J Dilla and Madlib found themselves feted as genre-transcending creative talents, and before it became de rigueur for indie musicians to talk up their love of hip-hop, Jurassic 5 had the strange distinction of being the one rap group that every pasty, introverted fan of guitar music could admit to loving. J5's affection for the old-school, their embrace of simple beats and nursery-rhyme choruses, and their moralising rejection of mainstream rap's focus on guns and money - qualities nicely encapsulated in the chorus-cum-mission-statement of their best-known song 'Concrete Schoolyard', 'Let's take you back to those concrete streets/Original beats with real live MCs' - struck a chord with those who were alienated by the perceived shallowness of the overground. 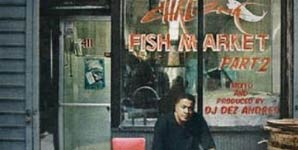 Deep-voiced former J5 member Chali 2na is still pushing the same agenda, still rejecting commercial rap ('Sick of this unconscious nonsense/how it's packaged and processed and un-fresh'), still keeping it real and providing a moralistic commentary on the ills of rap music and American society. There's something increasing odd about these claims to artistic superiority, though; the listener can't help but notice that while overground figures like Kanye are releasing grandiose artistic statements/follies (delete according to taste) and dabbling in every genre going, Chali is still pushing the same style he favoured back in the nineties. So who's really 'un-fresh' here? What justifies his claims to artistic superiority? The beats on Fish Market Part 2 certainly don't; with a few notable exceptions - most notably the thoroughly impressive, oriental-sounding 'Across The Map' - they're by-the-numbers efforts, overlaid with some polite scratching and occasional splashes of strings. What's more, there are no dramatic surprises in the lyrics laid down by 2na (pronounced 'tuna', as per his memorable introduction on J5's 'In The Flesh': 'They call me 2na, as in 'fish in sea'/Self-efficiency, that's my mission, see?').

Regardless of 2na's limitations, regardless of how over-familiar his style and subject matter have become, there's no denying that he's a talented rapper, and many of the album's highlights see him throwing out complex, twisting, multi-syllabic rhymes. 'Illin' is still on the syllabus in the midst of wack', he opines on 'Across The Map, whilst 'FM2' sees him rhyme 'chicken szechuan', 'upper echelon' and 'Gloria Estefan'. There's something admirable about 2na's love of words, and this is heightened by the casual nature of his delivery; there's no danger of proceedings becoming overly serious or academic, he never sounds like he's rapping with the mic in one hand and a thesaurus in the other, he always seems to be enjoying himself. Maybe this is the most charitable way to interpret his relentless pushing of the same old-school sound: he's deeply in love with that form of hip-hop, with its rhyme style and its beats, and any rapper who doesn't share his obsession is never going to sound fresh to Chali 2Na.