I once had a mug - I never bought it, I just ended up being its final custodian, as can happen with mugs - that had a big picture of Garfield on it, along with the tag line 'I don't do perky'. You imagine that this is the kind of ceramic mission statement which might apply to Cass McCombs, a performer who over the last decade has made a big deal out of being well - a bit of a miserable sod, really. 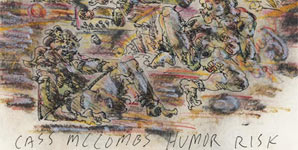 Born in California but having lived a peripatetic existence since which has even included a stint working as a soda jerk, our very own Mr.Sunshine has throughout his musical career been particularly averse to conducting interviews or otherwise sharing any of his philosophies around the creative process. This insularity has always seemed likely to permanently damage his chances of being heard by more than a handful of the super dedicated.

That ride through broke obscurity seemed unlikely to be interrupted by his first of two releases this year, April's Wit's End. Sombre and inward looking, McCombs seemed almost to be thumbing his nose to those who'd shown the fortitude to still be on the journey with him, as grimly epic songs like A Knock At The Door stretched out to almost ten weary sounding minutes. At times, it resembled not so much a piece of art as a performer's private joke, delivered in the public guise of an endurance contest. A breakthrough moment this was not.

It's as a result of a non-linear recording process that both we and he get a second bite at that cherry this year. With a floating itinerary and a modus operandi of simply vomiting out a bunch of songs until his mind is empty, the same sessions in which Wit's End were conceived also formed the basis of the material for Humour Risk, the results however being in almost spectacular contrast to its erudite predecessor.

Let's caveat that last statement; whilst I'm possibly tempted to use previously alien words like 'Pop', 'Tenderness' and 'Accessibility' when written in conjunction with McCombs, we're not yet talking about a man you should hire to do balloon animals at a kid's party. Instead, Humour Risk should be considered in all likelihood a temporary, sunshiney yang, a series of rogue expressions of contentment. We may never see this side to him again, but for now, let's be thankful.

Oddly, the brightness seems to suit him. The Same Thing takes the aesthetic of sixties chamber pop and gives it a gentle synth-led makeover, whilst opener Love Thine Enemy is the kind of thing Blur might've tried during their Pavement-loving era. Some things however seem far less permeable to change; following a well-established trait for opaque lyrical expressiveness the back story of Mystery Mail is one of bumbling drug dealers, a tale that McCombs himself has now since described as 'Modern myth'.

Even more predictably, some elements are still far, far away from the mainstream. Closer Mariah laughs in the face of big production values and goes instead for a waxy, out of focus effect that leaves our hero sounding like he's been marooned on lo-fi island; Meet Me At The Mannequin Gallery grinds like a Wit's End offcut, stubbornly refusing to break free from a low-on-the-horizon guitar strum. These are all part of the package however, and especially palatable when the makeweights are so exhilarating. Robin Egg Blue is the apex, as an engaging piece you guess that our reluctant troubadour has ever laid down, all graceful acoustic major chords and laconic melodies. It's ably backed up by the almost winsome balladry of The Living Word, a paean to a totally rhinestone free type of gentle alt.country strife. Both are uncomplicated and more than little beautiful, an overly used adjective in entertainment terms this century, but in this context an entirely appropriate one.

Where to next? Well, as we've established, there is no road atlas when you're a semi-tortured genius. The thing is, nobody - much less the emotionally reclusive artist himself - has an idea, either geographically, or musically. Humour Risk may be the only time your world and his collide, but it's a diversion worth taking, and a triumph for opening up the emotional door just a crack. 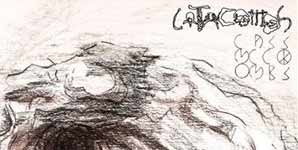 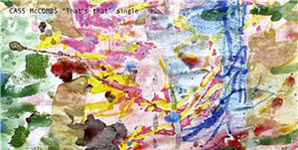