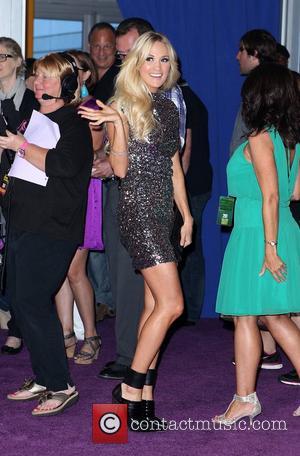 Carrie Underwood took home the biggest gong at the annual Cmt Music Awards in Nashville this week, winning 'Video of the Year' for her song 'Good Girl. The country star has won the same award at three different ceremonies this year.
On the red-carpet, Underwood was asked by Extra TV whether she had any advice for fellow songstress Miley Cyrus, who recently announced she is to marry boyfriend Liam Hemsworth. Underwood has been married to her hockey star husband Mike Comrie for two years, and the couple are considered to have one of the tightest relationships in show business. As a wife and music star, Underwood offered up some advice to the bride-to-be, saying, "Just take it easy. If you can be engaged for a while, plan everything slow and take your first couple of years just to really hang out". Though the couple married in 2010, it was not until Comrie traded to the Nashville Predators in 2010 that they could officially live together as husband and wife. The pair will celebrate their second wedding anniversary on July 10, 2012.
Elsewhere at this year's Cmt Music Awards, American Idol winner Scotty Mcreery won 'Breakthrough Video of the Year' for 'The Trouble with Girls', with Lady Antebellum won 'Group Video of the Year' for 'We Owned the Night'.