Brandon Flowers' 'Flamingo' is an valiant albeit predictable debut solo album, which at times, is on par with much of the material his band have released in recent years. 'Welcome To Fabulous Las Vegas', is an ostentatious homage to Sin City - but masquerading as an anthemic opener, the track never quite escapes the shackles of its often clichéd lyrics, Flowers sings, 'Didn't nobody tell you, the house will always win, Las Vegas'. But, there's much to enjoy of what follows, particularly 'Only The Young', a tight toe-tapping affair that will no doubt become etched upon the radio listener's consciousness - whether they like it or not - should it be released as a single in the near future. 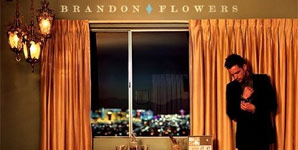 Elsewhere, there's the impressive 'Hard Enough', a duet with Rilo Kiley's Jenny Lewis. The interlaced vocals provide interest and intrigue, but this is no Mark Lanegan and Isobel Campbell, there's no intriguing incongruence, if anything the voices are similar sounding but nonetheless create a sweet sounding combination that represents the best piece of work on the album. 'Hard Enough' is the kind of material that should be making up the majority of a Brandon Flowers solo album, and there'd be little to pick at if that were the case, but 'Flamingo' is dogged by too many glam plodders that would comfortably sit on any record by THE KILLERS, rendering much of the album a rather 'so what' affair. That said, the record as a whole is far from pointless, and first single 'Crossfire' throws plenty behind the 29-year-old's case as a solo artist.

The album's influences are easily traceable, and Flowers would presumably bask in a Bruce Springsteen comparison, but therein lays part of the problem. The debut long-player from one of the most recognisable frontmen around sounds like The Boss at 60-years-old, it's straight from 'Working On A Dream' and 'Magic', rather than 'Greetings From Asbury Park' or 'The River'. So, a predictable album, unfortunately, inspires a rather predictable summary - and so, despite its faults, there's enough about 'Flamingo' to safely suggest Flowers will at some point return with a follow up, and there's plenty to build on.