Bon Savants most potent weapons are singer Thom Moran's varied and powerful vocals, Why This Could Never Work Between us, is testament to that, showcasing his ability to hit the highest of notes with ease and not be overawed by the tracks impressive thumping drum parts. It becomes more and more obvious throughout the album, just how integral drum parts are to this band, Tip Of Our Tongues has a U2 Sunday Bloody Sunday military style drum beat to it, its an effective tactic that gives the track an unrelenting momentum. 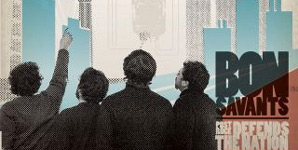 The albums title track is more shoe gaze than anything, with fuzzy guitars providing cover for some jangly lead parts. Moran's varied vocals are also fuzzy and do much to enhance already epic sounding midpoint in the album. Go To The Sun is more of the same with perhaps more of a 60s garage rock slant added to it.

It's not until Everyone, that the band display their best work, creating pop melodies and destroying them with distortion until they become a wild hybrid that you can help but be taken in by.

The bands sound is at its weakest on tracks such as Mass Av and Broadway, displaying an ordinary predictable chord sequence giving a plodding effect. However this isn't an occurrence that rears its ugly head often on Post Rock Defends The Nation.

Things are soon enough back on track, 91 sees the band displaying their pop sensibilities to great effect, this time they use less distortion and opt for heavier drumming and some wonderful bass lines to give the track added substance, it works to great effect and ensure the album finishes on a high.

What Bon Savants have dished up with Post Rock Defends The Nation, is a fine cocktail of shoe gaze and garage rock with just a splash of pop to allow it to appeal to a wider audience. Having said that, it's not an album that tries to cover to many bases, it doesn't feel like the band have no definitive style, the difference variations of genre on show here fit together perfectly and showcase a band that knows where it wants to go and how it wants to sound.