Bon Jovi need no introduction. After nearly 30 years in the industry, this New Jersey band have rocked into public consciousness with eleven studio albums and over 2600 concerts in around 50 countries around the world. Now in 2010, after 15 years since their last greatest hits, Bon Jovi are back to exemplify exactly why they are heralded as one of the greatest rock bands of our time. 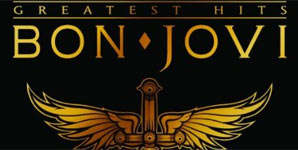 The album kicks off in dramatic fashion with undoubtedly their biggest track to date, the 1986 Livin' on a Prayer. That accumulative introduction is simply all that is needed to raise hairs on your arms. The collection itself does not lose steam either. Straight away we are struck with Bon Jovi's two other colossal hits, You give Love a Bad Name and the fan-favourite It's My Life. Considering that these two tracks span 14 years (with You Give Love a Bad name ironically being their first official single to chart at top of the US charts) simply highlights this band's resilient consistency across the decades. It's not even merely a chorological feat either. Tracks such as Wanted Dead or Alive, reveal this band's abilities to transgress across various sectors within the rock genre to country western extremes, whilst simultaneously concocting the perfect classic masterpiece. However, juxtaposed with these heavy tracks, Bon Jovi proves that they are just as anthemic in their ballads as they are in their powerhouse records, as exemplified in Bed of Roses and the timeless Always, which stands as Bon Jovi's highest selling single ever.

However, at times, there is something quite disconcerting about this greatest hits collection. Whilst evidence of new material is present, the majority of the songs present such as Bad Medicine and I'll be there for you are pre-1994, the year in which the last Greatest Hits was released; therefore begging the question of whether this LP was really necessarily at all. Similarly, the newer songs present are actually weak links. Tracks like Have a Nice Day and We Weren't born to follow reveals the more pop-orientated and commercial sound that has been produced by the band in recent years but they are probably not big enough songs to be present on this collection. At times, it simply feels that they have been included just to represent the band's presence in the music industry in the late noughties rather than as being credited as standalone classics. However, it must be noted that this is not necessarily always the case as the brilliant Who Says you can't go home highlights. Another assumed fault with the collection is the transatlantic gap. Whilst tracks such as Born to be my Baby and were huge successes in the US, they have failed to establish longevity in the UK and so unless you're a big UK Bon Jovi fan, you may at times feel lost on this record.

It is also important to make note of the two new tracks that finish the collection. What Do You Got? may be a beautiful power ballad that is sure to soon become a favourite, but it is No Apologies that is a standout track. With a chorus that is as catchy as hell, it is reminiscent of their much older material and is sure to go down well in the arenas that they will be playing across the world next year. Mutually, this Greatest Hits collection simply demonstrates exactly why 30 years on, Bon Jovi are still reigning the charts. Having produced some brilliantly memorable rock music and Jon Bon Jovi's added iconic vocals is merely the tip of the iceberg when explaining this band's success. Whilst at times one may question why certain tracks made the cut or even why the collection was made in the first place, this is definitely a must, whether you are a longstanding fan or if you are checking into Bon Jovi for the first time. Regardless, we will 'always love you' Bon Jovi.