Say what you want about the eighties - it's the decade that keeps on giving. Body Language are from that hipster nexus Brooklyn, but any similarities to their wraparound shade and skinny jeans wearing contemporaries - from a musical perspective anyway - is purely coincidental. Instead, they're all about the neon, pastel shades and plasticised soul of the decade that taste has happily long forgot. 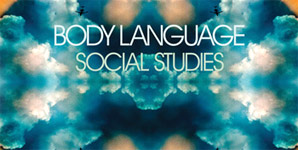 This isn't to say that Social Studies isn't a shallow but fun experience, a bit like a holiday romance - happy, risk free but something with a limited shelf life. The motif is topped off on Holiday, a which isn't cover of the Madge original in copyright terms, but has all of its helium naivety and throwaway disco vibe, co-singer Angela Bess sticking to that high register and stringing along her chain of fools expertly.

Perfectly in the moment for a hand holding week with a stranger in Morecambe, it's happily not the best moment either, an honour which belongs to the shiny funk of Falling Out. The rippling bass and retro synths make it the kind of sexy reminder of a blinder that Metro Area used to major in.

If that doesn't make enough of an invitation to a moment for you, BL are still happy to school us with a lesson in Pop #101 as well; Seeds of Sight has a spinning afro-beat skank which will draw some fairly obvious comparisons to Vampire Weekend, whilst the title track is the kind of cherubic reggae-lite that Lily Allen did.

One of the eighties most (or, if you like, least) appealing qualities was its obsession of making style a winner over substance. Whilst criticism of the chillwave crew as being nerds without soul is in some cases warranted, Social Studies proves itself to be the real deal. Opener You Can features twice, once in live format to prove that Matt Young and co. are musicians, not laptop jockeys. It's a statement but like everything else here, it's not a serious one. Body Language is proof that, like the decade that inspired them, having your cake and eating it is possible.