Actress Anna Kendrick Has Expressed Her Disdain After Learning Her Pal Mae Whitman Has Been Replaced In The Upcoming Independence Day Sequel. 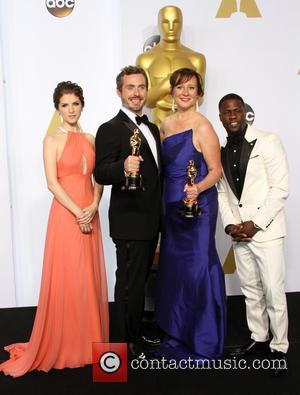 The news emerged this week (begs27Apr15) after Maika Monroe was announced as the latest cast member - she will romance new leading man Liam Hemsworth in the sequel.

According to The Hollywood Reporter, Whitman didn't even make the shortlist for the sci-fi action film.

Outraged fans took to Twitter.com to blast the decision, and Kendrick was among the angry critics.

The actress, who worked with Whitman on 2010 movie Scott Pilgrim vs. the World, tweeted, "What the actual f**k? (Whitman) is talented as hell, and JUST proved she can carry a film. Smh (shaking my head)."

Whitman has yet to comment on the casting change, but she appeared to hint that her looks had something to do with missing out on the job by retweeting a HitFix.com article, which suggested the 26-year-old actress may have been overlooked because she wasn't considered conventionally "hot".

Whitman isn't the only original Independence Day star to sit out the sequel - Will Smith has opted not to return for ID Forever, although the actress' movie father, Bill Pullman, and Jeff Goldblum will be back for the much-anticipated movie, which will pick up 20 years after the events of the first movie.

Production will take place in Albuquerque, New Mexico from 5 May (15).