Almost pathologically buoyant, this brightly colourful animated comedy is so cheeky that it's impossible to dislike. The plot may be thin, and the wackiness a bit too full-on, but every moment is packed with smart verbal and visual jokes. This rapid-fire energy keeps us laughing all the way through, while the lively song score has us humming along and wishing we could get up there and dance.

It's set in a garish fantasy world in which sweetly happy trolls are locked in a mortal battle with gloomy bergen who think the only way they can achieve happiness is to eat a troll. It's been 20 years since the trolls escaped to form a secret forest community, so they throw a party to celebrate. Led by Princess Poppy (Anna Kendrick), the festivities feature so much music, glitter and hugging that the bergen's Chef (Christine Baranski) spots their location. The paranoid troll Branch (Justin Timberlake) had warned that this might happen, and sure enough Chef sweeps in and grabs a handful of trolls to take back to bergen King Gristle (Christopher Mintz-Plasse). Feeling responsible, Poppy sets out on a quest to rescue them, and Branch grudgingly accompanies her. They also get help from the lovelorn bergen scullery maid Bridget (Zooey Deschanel).

There isn't a moment in this story that carries even a hint of actual suspense, but the action scenes are still exhilaratingly madcap, and the darker moments along the way generate proper emotion. Thankfully, the lesson is so painfully obvious (you don't need to eat a troll to be happy!) that the filmmakers don't bother hammering it in. Instead, they fill every scene with deranged wit, ridiculous gags and lively character detail.

Kendrick and Timberlake have a great time as they give Poppy and Branch some tetchy nuances of personality. And the all-star cast invests plenty of gleeful energy to the smaller side roles, including the show-stealer, Guy Diamond (voiced by The Big Bang Theory's Kunal Nayyar), who farts glitter.

All of this moves at such a breathless pace that it's over long before we're ready to go. The colour-drenched animation has a wonderfully tactile range of textures and perhaps every hue the animators could generate. And the collection of pop songs and original numbers is very clever, including perhaps the best use of Cyndi Lauper's True Colours in a movie, plus of course Timberlake's insanely catchy Can't Stop the Feeling. It's the kind of movie that leaves you wanting a sequel, as well as a troll of your own.

Watch the trailer for Trolls: 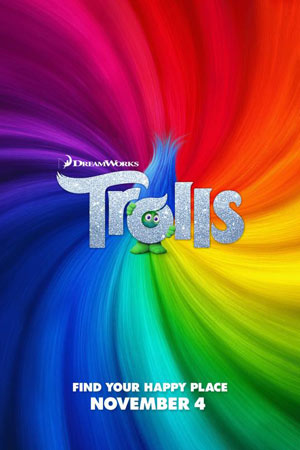