Woolly Jumpers is an appropriately named album, and not just because it's a compilation of music associated with the French record label Wool Recordings. The contributors, after all, give every impression of being (ahem) a close-knit community of similarly minded musicians, making music which is often as warm and comforting as an old jumper. And just like that jumper, their music's imperfections make it more endearing. 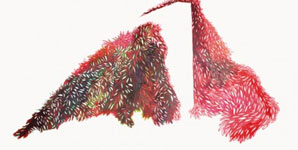 Most of the songs collected on Woolly Jumpers are psychedelia tinged folk numbers. The guitar is the instrument of choice, and a number of tracks, like Wolf People's 'Cotton Strands' and Connan Mockasin's 'It's Choade My Dear', combine a simple guitar figure with eccentric and interestingly flawed vocals. The impression of unassuming artistry that this musical approach generates is reinforced by the absence of any widely known stars: for listeners unfamiliar with the freak folk scene, the one name to generate a spark of recognition will be that of Laetitia Sadier, the former Stereolab singer. 'Statues', Sadier's excellent contribution, breaks with the record's dominant tone: it's a chilly, strung out, haunting track with no trace of warmth or playfulness. The only song here which successfully generates a similar mood is Dave Bixby's world-weary 'Drug Song', a downbeat account of substance abuse taken from his cult 1969 album Ode To Quetzalcoatl.

'Statues' and 'Drug Song' are Woolly Jumper's twin highlights, but there are some interesting moments elsewhere. A Classic Education's 'Terrible Day' gets a lot out of relatively little; its sad, sweet vocal aims for the listener's heart, and scores a direct hit. Luther Russell's '1st & Main' shows off some accomplished Elliott Smith-isms, and the serial killer strum of 'Pretty Little Eyes', contributed by freak folk veterans Castanets, is it once eerie and engaging.

Woolly Jumpers' greatest strength, as a compilation, may well be the obscurity of the material it showcases. Record label compilations can seem wholly unnecessary in an age when music can be streamed or downloaded (legally or otherwise) on demand. The idea of buying an album in order to acquaint oneself with a variety of new bands can seem almost archaic when new music can be listened to for free in so many places. But tracking down freely available music by some of the artists featured here must be difficult because of their sheer obscurity: so if you want an entry point into their world (and anybody with an interest in offbeat folk music should want that), Woolly Jumpers is your best bet.