2011, the year the guitar became redundant. Or at least that's what the doom mongers of medialand would have us believe. Of course that first sentence isn't strictly true, but at the same time it would be fair to say most groundbreaking artists of the past twelve months emerged clutching a keyboard in one hand and an Apple Mac in the other. And no, we're not talking about Skrillex either, thankfully omitted from this twenty-two artist-and-song strong compilation. That doesn't mean there aren't any glaring omissions that perhaps should have graced Rough Trade's near perfect selection either. Factory Floor, Oneohtrix Point Never, Walls and SBTRKT are all conspicuous by their absence, each one having enjoyed relative degrees of success in their respective fields last year. 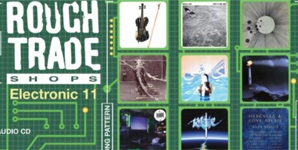 While such omissions are always going to be inevitable, 2011's big hype James Blake also having been excluded, it would be more appropriate to concentrate on the wealth of talent those trustworthy folks at Rough Trade have assembled here. Because 'Rough Trade Shops Electronica 11' is a must-have collection, particularly for anyone whose collection is still coming to terms with the rise of electronic-based artists these past twelve months. While not wishing to add any more disdain to the wealth of criticism already cast towards guitar orientated bands, it would be wrong to suggest the real spout of creativity in music has laid at the hands of those willing to embrace technology rather than repeat the tried and tested traditional rock and roll adage ad infinitum.

That said, there are elements of retro here. Ayshay's 'WARN-U' isn't a million miles away from Visage's 1980 breakthrough hit 'Fade To Grey', while John Maus, whose 'Head For The Country' from last year's critically acclaimed 'We Must Become The Pitiless Censors Of Ourselves' is included here, sounds like Ariel Pink fronting Kraftwerk. In a frightfully good way of course.

It's the more diverse elements of '.Electronic 11' that really stand out though. Nicolas Jaar's criminally underrated 'Space Is Only Noise If You Can See' from his similarly named album mixes the haunting diatribes of Suicide with the psychedelic sci-fi of Fuxa. Shackleton and King Midas Sound conspire on the awkward Death Dub Remix of 'Deadman' to bring the more obtuse elements of Kingston's legendary Studio One into the twenty-first century. And so it continues throughout the rest of 'Rough Trade Shops Electronic 11'.

Azari & III and Modeselektor both hark back to a time when Lidell Townsell and Gerald Simpson were busy pioneering the then unknown acid house craze towards the back end of the 1980s. Death Grips and Sensational meanwhile mix hip-hop's old skool vibe with a futuristic twist that sounds neither dated nor comprised in any way, shape or form. Emeralds mainman Mark McGuire contributes the haunting 'Alma (reprise)/Chances Are' while the Depeche Mode influenced 'Twin Stars' by Dublin's Solar Bears and the elementary clicks and bleeps on Ben Frost's 'O God Protect Me' make for an exhilarating closedown.

Overall, there's little to find fault with here. Even the bizarre 15-second interlude 'Pop Is Dead' by Anne-James Chaton fits in a perverse kind of way. For the measly sum of ten pounds 'Rough Trade Shops Electronic 11' is a worthwhile investment for anyone's collection, although we'd probably go one further and urge you to buy at least half the albums these songs have been borrowed from. I guarantee you won't be disappointed.