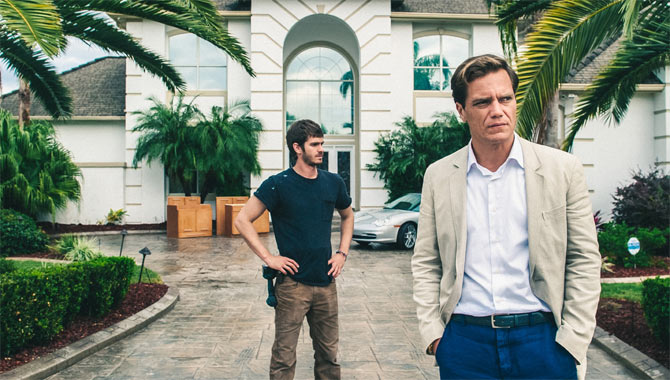 Dennis Nash is a struggling single father whose life is turned upside down when he's evicted from his home by a corrupt real-estate broker named Rick Carver. Facing life on the streets, Dennis is forced to work for Carver in the hope of reclaiming his home, but how will he cope carrying out the same ruthless eviction techniques that were used on him? As Dennis falls deeper into Carver's web, relationships suffer and his situation becomes more dangerous than he could have imagined.

Steve Butler is a successful businessman as part of a natural gas company who wishes to close down failing farming communities in order to obtain resources. He and his business partner Sue Thomason go to visit a particular town that is suffering a lot in the economic crisis in the hope that it will be easy to get drilling rights for the farmers' land in order to gain important resources through hydraulic fracturing, more commonly known as 'fracking'. Things do seem easy at first, with his proposition providing some hope of economic relief for many members of the community, however he is soon challenged when a highly regarded teacher from the school and a determined grassroots campaigner object to the proposal and go about trying to get the rest of the town to vote against it.

'Promised Land' is a particularly appropriate film for the current economic climate and raises important issues that are of real concern to many. It has been directed by Gus Van Sant ('Good Will Hunting', 'Milk', 'Paris, je t'aime'), written by the movie's stars John Krasinski and Oscar winner Matt Damon (writer of 'Good Will Hunting') and based on a story by Dave Eggers ('Away We Go', 'Where the Wild Things Are') and is set to hit screens in the UK next year on April 19th 2013.

A Buddy Story is the tale of a not very successful solo singer/songwriter's quest for self-discovery. Buddy meets Susan along his journey - his new next door neighbour who is suffering at the hands of her abusive boyfriend, Pete. She seeks an escape from the city and her boyfriend so she, Buddy and Buddy's pet turtle drive out into the open road making a variety of stops on the way; such as the birthday party of an old man turned one hundred, and the rowdy atmosphere of a biker bar! The conclusion of this heart-warming story brings realisation and important understanding of the journey to find happiness.

By Nicholas Schager
OK
Quirky to the point of irritation, Richard Ledes' A Hole in One trades in inventive oddities at the expense of dealing with human emotion. A surrealistic period piece about humanity's hunger for quick-fix solutions to its complex problems, this romantic fable about insanity and brain incisions knows a thing or two about mood. From its title sequence of disembodied skulls, penetrating lances, and scraggly tree silhouettes to its non-linear narrative and ethereal dream imagery, Ledes creates an atmosphere of contemplative, quixotic fantasy. The problem, however, is one of forced weirdness. Its deliberate artificiality a cold and remote pose, and its characters archetypal cardboard cut-outs rather than fully fleshed-out people, the film is a strained attempt at eccentricity that ultimately reveals itself to be a dramatic non-starter.

Continue reading: A Hole In One Review