By Andy Peterson in Music Reviews on 01 March 2016

Upon the Contact towers whiteboard, Montreal born Tiga (That's pronounced Tigger, not Tiger by the way) has his name underlined and a big arrow in pen pointing towards a balloon with the words "Difficult transition" inside it. This is because we like it when a new record reinforces one of the house rules, and No Fantasy Required  does so by proving the old maxim that the path from DJ to performer is not always a smooth one.

This release marks his third attempt to do something like that, the others - his 2006 début Sexor and the succeeding Ciao which came out in 2009 - causing barely a commercial ripple, unless you live in Belgium, where they both did quite well. Given the Canadian's DJ profile and a history of high profile collaborators - James Murphy and Matthew Dear to name but two - this lukewarm reception is somewhat confusing: Ciao especially whilst being soaked in the bass-heavy throb of its time contained more than enough grooves to break Tiga at the very least out of the Low Countries.

Having added actor to his CV since, starring in Adam Traynor's chess-themed 2010 release Ivory Tower, and also compering a show on Radio 6, the seven year wait for No Fantasy Required is partially explained. Of itself however it's something of a three-speed ride: Dear is in the producer's chair (Along with veteran Finn Jori Hulkonnen), whilst the listener themselves is taken from the  ridiculous to the sublime to - as the man himself put it in his own press release - the borderline sacrilegious. 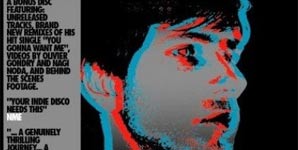