The Duke & The King

The Duke & The King Quick Links

The Duke & The King - Shaky

Simone Felice takes a very different direction to The Felice Brothers with his new band The Duke & The King. Different it may be but The Duke & The King's second album 'Long Live The Duke & The King' is packed full of excellent songwriting. The new single 'Shaky' is released in the UK on September 20th through Loose Music/ Silva Oak and it's the first from the self-produced album.

Continue: The Duke & The King - Shaky

By Andrew Lockwood in Music Reviews on 09 September 2010

The Duke & King follow up their highly regarded debut, of barely a year ago, 'Nothing Gold Can Stay', with their sophomore album Long Live The Duke & The King. The four grifters from New York reprise their roles as purveyors of fine soul filled folk to once again showcase some outstanding song writing skills coupled with deft arrangements and musicianship of the highest calibre. We have the time honoured hankering of many a drummer wishing to be not just the 'man at the back with the sticks but the lead singer' to thank for the success of The Duke & The King. After resigning from the family band The Felice Brothers, Simone Felice and guitarist Robert 'Chicken' Burke, together with violinist Simi Stone and hopefully contented drummer Nowell Haskins, have made the Duke & The King more than just a side project.

The album, recorded once again "Deep in the woods in Bearsville", Greater New York, opens softly enough with a rather timid touch. As if finding its feet for the performance ahead, Gloria rings out with sea scented cymbal rolls and over layered four part vocals...."The girls would come and go but you were always there, with them dying daisies in your hair." As an opener it's good, but what follows is generally a lot better. 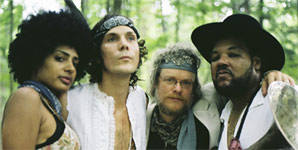 The Duke & The King Quick Links