As far as heavy weight musical trios go, 'Seeker Lover Keeper' are up there with the best of them. They may not have the pop prowess of Bananarama, the overtly sexual charms of Destiny's Child or the classic appeal of The Supremes; however, they do have a collective presence and musicality that makes them a superior group. As three individual talents in their own right, Seeker Lover Keeper are akin to the previous amalgamated trio' (that they are doffing their collective caps to) made up of Dolly Parton, Linda Ronstadt and Emmylou Harris. Although they may not be as brassy, or as bold, in their own way, they are still dropping any idea of pretension and one-up-man-ship for the combined good of the music and the group. Rather than a conventional group where tensions can run high and competition within the ranks very often causes ultimate implosion, here, for their debut at least, we have harmonious creativity in abundance. 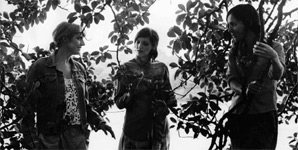 Seeker Lover Keeper is the self-titled album from three of Australia's most significant female talents. Sarah Blasko, Sally Seltmann and Holly Throsby have all played a part in shaping the contemporary musical landscape of the antipodean shores. In coming together to form Australia's first female super group they have combined a rich seem of talent to deliver up a surprisingly entertaining and enchanting record. Each of them has a lot to offer, as well as it must be said, a lot to lose by entering into such a venture. Sufficed to say the risk of their new venture has paid off handsomely for all concerned. The sweet, light, airy, beguiling and slightly kooky 12 track set is a joyous collaborative triumph.

A more delicate introduction to proceedings would be hard to imagine as the subtle, almost whispered, notes of 'Bring Me Back' ease us gently into the record. The loving lament is a glorious mix of layered harmonies and angelic notes set to the most minimal of arrangements. The organ and skipping hand-claps of 'Light All My Lights' pick up the beat directly before one the album's definite highlights. 'Even Though I'm A Woman', a bouncing piano lead number, is a belter of a track. It's a very Regina Spektor-esque song that is outwardly up beat but with a belly of regret, deceit and sadness... "I feel like a travelling salesman, even though I'm a woman, picking up my bags from the station, standing there face to face, I'd be lying if I did not say, I love you more when I'm missing you." 'If The Night Is Dark' is similarly impressive but for very different reasons. The deep resounding piano notes give a sombre mood to the outpourings sung so beautifully in the soaring vocals.

Musically, there is a clear coherence between each of the tracks on the album but that's not to say the ladies don't mix it up throughout. 'Rely On Me' uses electro tweaks to score a more unusual aside that is sung in a rather more casual, almost East London vernacular. We're not talking Kate Nash or Lily Allen but something approaching that laid back street savvy attitudinal tone. 'Theme I' uses a fabulously deep bass riff and rhythmic tribal drum beat paired against a lovely high vocal to deliver up the group's name..."I just want you to know, wherever you go follows like a ghost, burden's not just your own, you're a seeker, lover, keeper." Written by Sarah, just prior to her arrival in New York to record the album, it was, apparently, inspired by a phrase used by Sally, partly as a descriptive, for each of the bands members.

Elsewhere, 'Every Time' sounds a little like PJ Harvey's 'Stories from the City' era, and 'We Will Know What It Is' is a throwback to wispy 70's floral dress folk. 'Going To Sleep' employs some great use of bawdy, saloon bar piano whilst the close out track, 'Rest Your Head On My Shoulder', is more of a cinematic curtain call with a vaudevillian heart lost in melancholy.

In essence, Seeker Lover Keeper, the album and the band are a charming success. Each of the three voices compliments each other; they are not vying in any way for supremacy. There is no dominant lead, no need for one to mask another; it is far more that they are all working simultaneously to achieve a collective goal in a musical co-operative that has been so effective you hear a vocal delivered in unison. If you wanted to analyse the resultant sound you would find it very difficult, on many of the tracks, to extract each third, they are so wonderfully woven together. The vocal and the quality of the song writing are what makes this record work. It's not over engineered or produced; it's a thing of organic simplicity that will hopefully not just be a one off.