Surprisingly Jawbone represents Paul Weller's first fully-fledged attempt at a film score. The Modfather has of course, donated the occasional composition to previous soundtracks, but he's never tried his hand at creating a soundscape to accompany a cinematic venture. Jawbone stands apart from his discography as a wonderful oddity, one that in its best moments sounds like Vangelis being remixed through Brian Eno's laptop. It's that unexpected and bold approach that really shows how committed Weller is to this project. 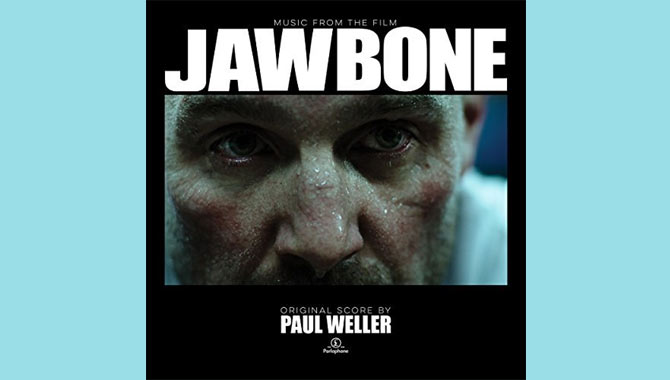 The main suite of music that Weller has composed, perhaps constructed is a more apt term, sits proudly at the start of the album. 'Jimmy/Blackout' is a real achievement, because with minimal fuss Weller manages to keep your attention for more than twenty minutes. He creates an atmospheric journey through a world constructed primarily of woodwind instruments and electronic samples and loops. It slowly shifts and morphs through different moods and conveys a life of regret and sorrow punctuated with occasional joy and trauma. This is a revelation to any Weller fan, it's like those little sonic experiments he hinted at on 22 Dreams have now bloomed into a full grown opus. It's four minutes until you even hear a hint of a guitar, over ten before you get a guitarist and drummer working in tandem, and nearly twenty until you get a Weller vocal performance which acts as a coda for the track. The experience is engrossing and while the crooning vocal dripping in reverb seems a little jarring at first, it does provide a suitable crescendo for the track. Without the vocal the composition could otherwise have slipped into a meandering musical cul-de-sac.

The album has such a promising start that the rest of the record stands cowering in the shadow of 'Jimmy/Blackout'. Occupying around sixteen minutes the remaining six tracks feel a little more traditional and subservient to the format of a soundtrack. Weller presents two acoustic ballads that could sit comfortably on any of his other albums, while everything else remains instrumental and brooding. These pieces of Weller's score are successful, but feel like unfinished thoughts in comparison to the epic sweep of the first half of the album. Perhaps placing this material around the suite would have made the record feel more balanced, rather than the latter stages having a whiff of afterthought.

The biggest criticism though is the relationship between the music presented here and the film itself. Weller is too reliant on the occasional pieces of dialogue to remind us of the film's narrative. Without these you'd be none-the-wiser that this was a film about boxing. While Michael Smiley and Ray Winstone, among others, may be compelling on screen, their appearances here sound like clichéd lines from a gritty British drama. The dialogue does nothing to draw you to the film and seemingly detracts from the whole experience. Weller's score may feel a little detached from the film itself, but using the dialogue to bridge that divide just feels a little forced. The score itself is impressive, but almost deserves to exist in its own right, divorced from the constraints that exist when associated with a film.

This isn't the first time that Weller has been involved in the soundtrack for a BBC production starring Ray Winstone, the first being 1997's Face. However this is a project unlike anything Weller has ever tackled. Don't be fooled into thinking it's a veneer for an abandoned solo album, it's not, Jawbone stands as an impressive example of Weller's ability to surprise, especially when he's not reliant upon his voice or guitar. It's a score worth your time, but it sits in an odd and as yet unexplored corner of Weller's creative world. Based on the results this time, it's a corner he should consider straying into a little more often.