Review of WYW Album by Wear Your Wounds

Wear Your Wounds is the solo project of Converge frontman Jacob Bannon. Converge have arguably been the best hardcore band of the last two decades with the highest level of emotional intensity, the most visceral sonic textures and twisted experimentation. Across milestones such as 'Jane Doe', 'You Fail Me' and most recently 2012's 'All We Love We Leave Behind', Bannon has been a big part of Converge's winning sound, often screaming at such banshee-equivalent intensity, that you don't know how it's physically possible. However, Converge occasionally delve into more ethereal material, where Bannon is equally as effective with a haunting, splintered croon. Whichever way Converge go, it's always an engaging outpour of emotion due to how bare Bannon's lyrics are and him putting everything into delivering them. This passion extends to Wear Your Wounds' self-titled debut and sees a full exploration of restrained realms Converge only occasionally dabble with. 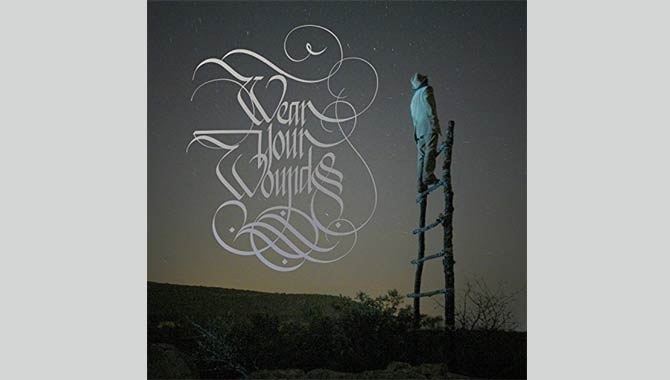 The title track kicks this thing off, immediately pulling you in and not letting go, with monolithic guitar stokes, reinforced with earth-shaking feedback, serene piano keys and Bannon's blurred vocals sounding like he exists between dimensions. Overall this song is empowering, by marrying conquering force with meditative patience, making for the kind of strength that's well-earned, as opposed to going down the quickest route. It's the strongest track on the album, but it by no means overshadows anything that's to come.

'Giving Up' feels fractured with a coarse piano riff that struggles to walk, however hazy, soaring guitars come in along with some dominant, marching drums and the song straightens itself up, and goes on ready to take on anything.

This song and quite a lot of this record is reminiscent of Bannon's old band Supermachiner, who served as Bannon's first major venture into more nuanced genres such as post-rock, shoegaze or ambient music. They were an impressive band, with plenty of captivating moments, yet there was a sense Bannon was still finding his footing with music outside of hardcore. This time around however, he's playing it like a master with years of experience and craft under his belt, so if you liked Supermachiner, you're going to worship this record.

'Iron Rose' might just be the most awe-inspiring, epic track of the year thus far. This song spends four minutes feeling like it's written from an abyss with Bannon and the piano sounding like they're about to pass out after being on a long and difficult journey, before the biggest surge of energy shines down from the heavens in the form of bluesy, licks and impenetrable, pounding drums, making for victorious getaway from the morose first half of this song.

For about half of the songs on this record, there's a slight sense that this record is a one-trick-pony, in how a lot of the elements get really familiar, really quick with limp piano, colossal guitars and drums featuring on pretty much every track on this album. However, there seems to be, at the very least, a little something on each track to keep it interesting, not to mention the level of emotion being put into this thing. Then of course there's the odd track that is vastly different to anything else on the record.

'Best Cry Of Your Life' packs the most adrenaline of any song on the record, with hazy, tremolo picked guitars at a frantic speed, which feel like strobe lights, the way they don't give up and overpower your senses. Bannon's voice aids the instrumentation perfectly, in how otherworldly it sounds, adding to the song's supernatural feel.

The record ends on a tender, sorrowful note in the form of 'Goodbye Old Friend', a nine-minute song where delicate notes wistfully drift along whilst Bannon is, as the title suggests, saying farewell to someone important to him. In this song, he thanks this person for 'all of the lessons that you taught me' as well as 'all of the sh*t that you gave me.' It's powerful, the way Bannon shows how any kind of relationship can help you grow and how the bad aspects are just as important as the good times to make your stronger. The song progresses into another layer of instrumentation coming in, in the form of steady percussion and light, tremolo picking, making this record go out gracefully.

This is a fantastic debut record. Where the healing factor and release of Converge's music is mostly feeling like there's someone else who wants to scream bloody murder at the world and life, when you need that; the catharsis of Wear Your Wounds is akin to someone holding your hand in comfort and walking with you, keeping you safe. It's raw and completely sincere, just like Converge, however the more serene and patient approach makes it a different beast altogether. It's been a long five years since Converge's last record and whilst this isn't by any means something just to fill that hunger for a new one, it is a new kind of experience from one of the most emotionally compelling vocalists today.