'Dusk' is Ultimate Painting's 3rd studio album in as many years, following on from 2015's 'Green Lanes' and their eponymous 2014 debut. Jack and James recorded the ten tracks earlier this year in Jack Coopers North London studio, an aside made more interesting given that it sounds less North London and more South California. 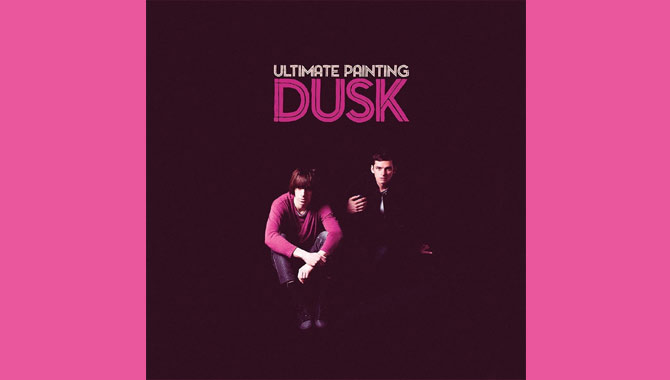 I have to admit I'm a little at odds with this record, it's like a slickly written American Sitcom. Not that it's over produced or that it's in anyway, poor. It's just that you get what you were promised or expecting, and really nothing more. There are some great moments, some very good songs, and no duff tracks. It's not written by an ever expanding committee of screen writers huddled away for hours but it does at times, especially listened to in album format, approach bland. It's very likeable and less lovable.

From the opening, first release, track, 'Bills', the scene is set for a smooth mix of harmonies, melodic instrumentation and earworm quality hooks driven through many a catchy chorus. Second track, and second single, 'Song For Brian Jones', as well as 'Lead The Way' and 'I Can't Run Anymore', take an even more laid back approach with a Broken Bells come Teenage Fanclub fusion. The soft vocal tones and intermittent keyboard on 'Lead The Way' are so soothing you find yourself drifting into a calm mesmerising tranquillity. 'Who Is your Next Target' is similarly embracing and warming in its gentle delivery and comforting serenity.

'Skippool Creek' veers marginally into a more psychedelic arena but still in a very melodic and harmonious way; transfixing you with a weird, zoned out, vibe that kind of acts as a mild sedative, relaxing and numbing in equal measure. 'I'm Set Free' only endorses the feeling that 'Dusk' may well be appreciated better at either end of the day and with the possible enhancement of a exotic cigarette or two?

Where 'Dusk' does push its edges, only so slightly, is with the beautifully captured, brilliantly brief 'Silhouetted Shimmering' and the lyrically deft 'A Portrait Of Jason'. You can't help but sing-a-long to this mildly odd, but nevertheless delicious chorus. The layered vocal and tender guitar work superbly together.

Overall 'Dusk' is like the musical equivalent of Ronseal; "It does what is says on the tin". Rather like those radio station formats that pitch all there airplay to maintain an even sound throughout, so there's less likelihood of you switching channels, 'Dusk' is similarly devoid of any bumps in the road; there are no jolts, no shocks but sadly no surprises. Dusk was recently Album Of The Day on 6Music but it'll not be making my top ten albums of the year this year. Good, but not great.