Have You Ever Seen The Jane Fonda Aerobic VHS? - Jazzbelle 1984/1988 Album Review

Review of Jazzbelle 1984/1988 Album by Have You Ever Seen The Jane Fonda Aerobic VHS?

Have You Ever Seen The Jane Fonda Aerobic VHS? are full of the same boundless energy and enthusiasm with the release their sophomore album, 'Jazzbelle 1984/1988'. Their second album, following up 2015's 'Teenage Sweetheart', is a slightly crisper, better produced and more immediate offering than their first. Taking in the de rigueur topics of love, loss and break-ups, 'Jazbelle' also, more randomly, covers He-Man and Real Estate Agent Phil Dunphy! (Modern Family) 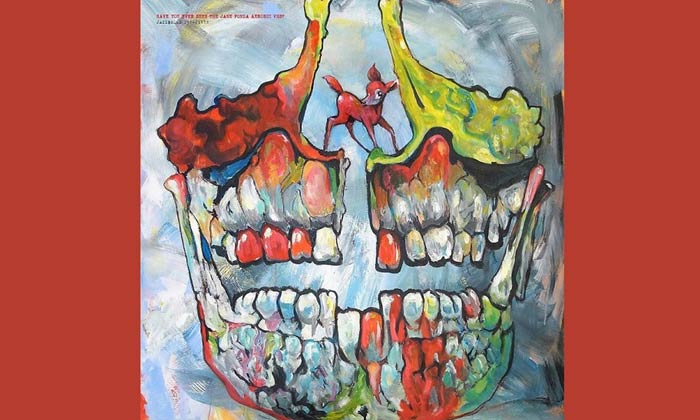 If you're unfamiliar with the Finnish garage scene you've no need to worry. Have You Ever Seen's blend of music sounds fresh and, in the most part, upbeat but has its foundations stretching back to the 60s. With a So-Cal, Surf-Pop and Indie vibe, HYESTJFAVHS infuse their tracks with an infectious sound that has elements ranging from Jan & Dean, The B-52s, Group Love and even the Inspiral Carpets.

'Magic Swimming Pants' heads up the roll call of eleven tracks and immediately gets you in to the '60s groove with its retro keys (a la Pizzicato Five). It has the same wonderfully joyous feel as those early Group Love offerings, all energised with a youthful, acutely naive sensibility. 'The Heman Song', along with 'Mareride', introduces more of an Inspiral tone with the organ-like keys underscoring the dueted and harmonised vocal. 'Eggs' and closer 'Period' bring in a brass element and even a nod towards Strawberry Switchblade on the former track as 60s garage meets 80s high pop. On the latter, more percussively charged track, we get an equivalence to an old Pearl & Dean cinema add as the horns blast out their uplifting notes.

The fairground fun continues with 'What Would Phil Dunphy Do?' and the very excitable, somewhat frenetic, 'Hanky Panky'. Where all the elements align, in a differing configuration, to produce a tune a little out of character is on the mid-album track 'Sheep'. It's a tad more restrained (for the Finnish threesome) but fuses all of the ingredients that make HYESTJFAVHS so enjoyable. Susse Stemma-Sihvola's vocals are full of a New Wave bravado on the epic two-parter with a hard to resist chorus and anthemic close out. More in keeping with the band's energy are two of the briefest tracks; the hectic velocity driven 'Teeth' and piquant and potent 'Bambi Act'.

'Jazzbelle' is the perfect tonic to lift your spirits in the early months of the year. It's uplifting, vibrant, fun and light. It's a welcome relief from the brooding, melodramatic and overly serious. It's not full of its own self importance and doesn't pretend to be anything other than what it is: energised garage pop. It's surely music that'll turn that frown upside down.