Review of Punk Album by Chai

Can Punk ever be cute? Can cute have a Punk attitude? The essence and manner of Punk has been applied to many things over the years but seldom has it been called cute or cuddly; surely that would seem to be the antithesis of what it's come to represent. Or does it not matter how you dress it up if the underlying attitude is still the same at its core? Is it, in actual fact, even more Punk if on the surface of it you are challenged and confused as to what it's all about, where it's coming from and what it means? If the underlying message is of non-conformity, is to challenge accepted norms and to subvert and change, then isn't that a version of Punk? 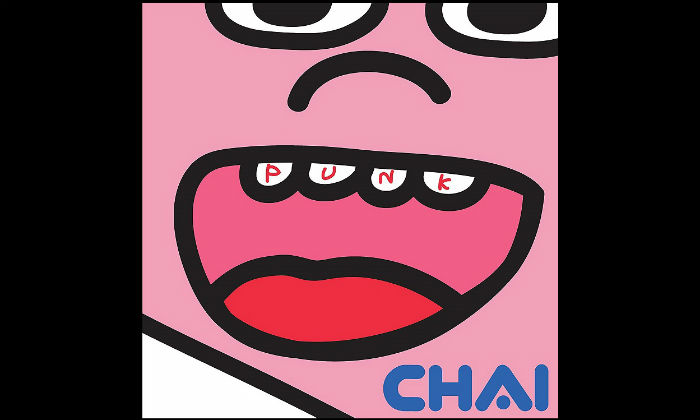 It's debatable whether you can argue through any point around Punk in this way as by its very nature it can't have a rigid ideology. It's forever shifting with the times to confront, push back and deviate from today's new norm. Never was this better expressed than in the 'Garbage Man' lyric, "You ain't no Punk, you Punk!". Whatever your take, I can safely say with some certainty that when you first hear Chai you will find yourself asking: 'What the hell was that?'

Chai are a foursome from Japan who are set on 'rebellion'. They are hoping to change preconceptions about the Japanese obsession with Kawaii (the culture of cuteness) by taking it by the scruff of the neck and ringing the bejesus out of it. Chai are like Hello Kitty on speed, like My Little Pony on steroids, like Moshi-Monsters on Methamphetamine, or a frighteningly potent combination of all three.

The band's second album, following on from last year's debut 'Pink', is as you've no doubt clocked, called 'Punk'. As the band point out, it's not necessarily about the music genre for them, it's more about self belief and self expression and becoming "the person you truly want to be." That said, let's take the vocal to one side for a moment. The album opens with the track 'Choose Go!', underscored by the most dirty of scuzzy basslines paired to a driven and exhilarating percussive beat that is relentless in its velocity. The tongue-in-cheek swipe at ridding yourself of negativity, with a Utah Saints sample coursing through its veins, is the follow-on of 'Great Job' and the first single lifted from the album 'Fashionista'; it employs a subverted funky bassline fit to grace any Nine Inch Nails song.

Perhaps the most 'out there' of the ten tracks that make up the latest album is the autobiographical 'This Is Chai'. The mix of crazed beats, layered vocal treatments and horns is a frantic explosion of an imagination which knows no bounds. It's 2m37s of cartoon psychedelia that sounds like a manic episode captured in musical form and it's quite brilliant. The more immediate sing-a-long of 'I'm Me' is more pure pop than Punk, whilst 'Curly Adventure' is soundtracked by a score closer to New Order. 'Future', the closing track of the album, calms the mood ever so slightly with more of a considered, less frenetic arrangement in a track that is as mellow as Chai get with the nervous energy that abounds elsewhere being turned down a notch.

Although there is an argument currently circulating that such terms should not be used so freely for fear of stigmatising mental health, and I would not wish to belittle that, the music of Chai is bonkers! Raving mad, bats**t crazy, Looney Tunes, loopy, unhinged and at times insane. As someone who is not Japanese, is not that familiar with all that is Kawaii and has not grown up, or been bombarded, with J-Pop I'm sure there are nuances that have been literally lost in translation but, equally, I am sure that regardless of that Chai would still be something of a weird oddity. It's no wonder that they've been featured on Stuart Maconie's 'Freak Zone'. 'Punk' by Chai is a curious anomaly that will divide opinion but at its heart there is some musical magic.