Review of Ginger Album by Brockhampton

If you're remotely into hip-hop, then Brockhampton is almost definitely a name you'll have heard in the last few years and even if you're not, you might've done anyway because of just how much the 'best boyband since One Direction' are taking over. Comprised of their fearless leader Kevin Abstract (goofball where there's more than meets the eye), Merlyn Wood (versatile wildcard), Joba (puppy-eyed bad boy), Matt Champion (wordsmith poet), Dom McLennon (heartthrob crooner and guitarist), Bearface and, of course, ahead-of-the-curve producers Romil Hemnani, Jabari Manwa and Kiko Merley, it's safe to say that the Brockhampton boys can each give something everyone can enjoy. 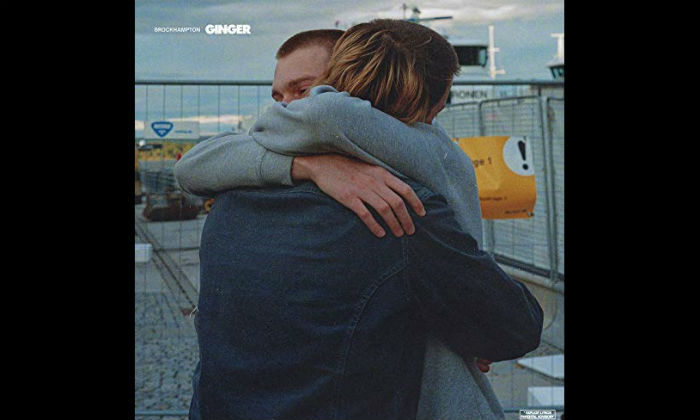 Across their 2017 'Saturation' trilogy and last year's experimental 'Iridescence', Brockhampton have carried this everyman spirit as they detail overcoming their struggles and, usually to much bopping, their coming out swinging effect. They're back already with newest album 'Ginger' for a more toned-down affair this time around.

'No Halo' opens 'Ginger' with a classic noughties acoustic pop vibe, delicate chords wistfully breezing across our reflecting faces, whilst the Brockhampton members openly rap about being lost, their flaws and their shortcomings. In particular, Matt explores what sounds like a failed relationship, Dom talks about falling into old habits and Joba confesses going to church drunk and thinking he's better than God. It's a glum, though stunning song, but does contain a ray of hope. There's an addictive hook delicately crooned by guest Deb Never who insists 'I'm sure I'll find it.'

'Sugar' goes even more folky. In terms of the acoustic touches and cabin-like homely hook from yet another guest, Ryan Beatty, it wouldn't sound out of place on a Fleet Foxes or Bon Iver song. However, the subsequent verses keep it hip-hop, the members being more positive, reminiscing good memories and focusing on their accomplishments. Bearface delivers the real show-stopper on this one, with his melodious, sensual serenade.

'Boy Bye' uplifts the mood again sonically with zany, Latin touches in the instrumental and more swagger in the delivery. When you look closer into the lyrics, though, you still find the same topics of depression and being stuck in a rut.

For pretty much the entirety of 'Ginger', we see the boys dwelling on life, struggles and the things bringing them down, themes that are absolutely no strangers to Brockhampton's songs. However, 'Ginger' is the Brockhampton record that is most saturated in darkness, with all of their previous albums being balanced out by more hyped songs such as 'Heat', 'Queer', 'Boogie' and 'New Orleans.'

'If You Pray Right' is probably the most bouncing song on 'Ginger' with eerie, suspenseful flickering that creeps up and surrounds you, before marching band horns blare out and the boys come firing on all cylinders. Dom delivers a confident mouthful about how strong the group are, Matt warns that if you're not carful you'll 'watch it all collapse', Merlyn coldly casts aside someone who's tried taking advantage of the group and Joba offers one of his more risque verses about spanking and 'sticky fingers.'

As thrilling as this song is compared to the hardest songs on previous Brockhampton albums, this isn't in the same league; at least in terms of sonic punch, but for sure in lyrical content. 'Ginger' is definitely challenging you to crawl deeper, rather than yanking you in.

With that being said, arguably the highlight of the whole record, 'Dearly Departed', isn't quite as vague or mysterious in its subject matter and maybe even gives a clue to what's got Brockhampton down on the rest of the record. Amongst noir soundscapes and fusion licks that feel like they could've been taken from an old cop show, Kevin and Matt further detail some trauma and loss of theirs, but then Dom comes through with perhaps the most visceral, intense moment of the record where he talks about what is likely the experience of cutting ties with former member Ameer Van.

The story of Ameer Van has been well documented as the problematic Brockhampton member the band had no choice but let go. It's been a controversial topic in the Brockhampton fanbase, but Dom venomously puts down any justification or excuse for the man, opening with the line 'How many sides to a story can there be when you saw it with your own eyes?', before subsequently detailing acts that sound identical to those of Ameer's and pointing out the cowardly nature of them.

Thankfully the title track warms things up with cosy, fuzzy keys that pull at the heartstrings; it's not too dissimilar from something Kanye would've made on '808's & Heartbreak.' It's also where Kevin really shines on the record. The Brockhampton leader has penned some excellent verses across their back-catalogue, but more regularly he is the guy providing the irresistible hooks and this is in the top five of his, deeply but nimbly lamenting about how he'll always have space for a certain someone in his life.

'Big Boy' returns to the abyss with harrowing lo-fi beats and memories of simpler times. Joba in particular is in his more aggressive mode, just bitterly spitting line after line of confusion, struggled relationships and other past troubles.

'Ginger' is another winner from Brockhampton in terms of quality and another part of their legacy, but unlike previous efforts, there's very little air of victory. This just might be Brockhampton's most therapeutic record yet and if not for the listener, definitely for them. There's a lack of 'banger after banger' sensibility on 'Ginger' that is missed, however this is the kind of album that sees the band coming to terms with what they've been through, going through the stages of acceptance and only when it's all said and done is the path laid out for them to have more fun again. If you think your heart can take it, don't miss this one.