Review of Hopelessness Album by Anohni

Anohni's (of Antony and the Johnson's fame) debut album as a solo artist, 'Hopelessness', is one of the most beautifully arresting albums of the year so far. It's unashamedly political, self-reflective, deliciously ironic and at points pessimistic to the point of absolute devastation. 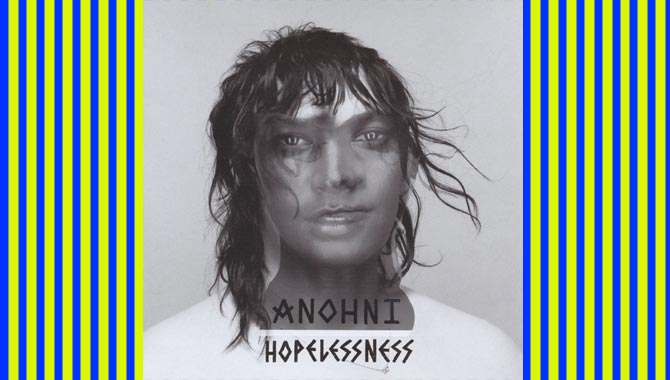 Anohni follows narratives throughout 'Hopelessness' in the first person, flitting between characterization and moments of self-reflectiveness. It seamlessly bleeds from character to her personal perspective as the album progresses, however it seems to be expressing the attitudes of so many who are disenfranchised, and more sinisterly, complicit and confined within a corrupt system that brood over the listener.

The topics it explores are vast as it weaves through drone strikes, environmental desecration due to global warming and complimenting it with another track hinting at notions of eco-feminism. It even deals with the surveillance state introduced by the likes of the NSA, the dangers of hyper-masculinity, and there's also a track criticising Obama in his fraudulent campaign. Which, to Anohni, has been nothing but underwhelming in its manifestation as a two-term presidency.  The fragile ballads of past work have transformed into luscious electronic pop courtesy of Hudson Mohawke and Oneohtrix Point Never, which consecrates 'Hopelessness' as one of the most accessible yet heartbreakingly evocative releases of recent memory.

The opening track, 'Drone Bomb Me', follows the character of a young girl in a distant land of mountain sides and sweeping oceans. She begs for the same destructive death that her family met by US drone strikes on those very landscapes. Anohni's vocal delivery is sublime and operatic, soaring in its chorus like the very tool of destruction it romanticises. The protagonist pines for death, hoping to be the lucky one in this random chance of obliteration as expressed in the lyric "I wanna be the apple of your eye/so drone bomb me". 'Drone Bomb Me' subverts the typical yearning for desire and reciprocation found in traditional female-led pop music, and makes the harsh reality of drone strikes (something we are all complicit in accepting as a reality) aggressively real for this albums intended audience.

'Crisis' is sonically much more sombre but uses a similar idea. It brings the hypothetical of drone strikes killing your mother, father, and children spread out onto separate lines; recurring the question "How would you feel?". It moves on, patiently listing world atrocities such as torture, televised executions and the use of mass graves all the while Anohni gradually builds her wailing of apologies, reaching a crescendo and repeating a sentiment which is difficult, if at all possible to accept - "I'm sorry."

'4 Degrees' is introduced with passionate percussion and building synths as Anohni repeatedly croons "It's only 4 degrees". Horns bellow underneath as she demands the destruction of the ecological world, with her sentiments gradually worsening in the Earth's death as sampled strings cut through. "I want to hear the dogs crying for water/I want to see the fish go belly-up in the sea". The sheer arrogance of welcoming and encouraging the geological stage of anthropocene takes climate change denial to a bratty, logical end. The result is an equally disturbing yet infectiously catchy pop song. A track which compliments '4 Degrees' thematically is 'Why Did You Separate Me From The Earth?'. Its xylophone sounding melody which gradually transforms into fiddling murmurs and sugar-coated synth forms a beautiful ecofeminist ballad, asking why so much destruction to the natural world has happened. Anohni denounces the ruthlessness and violence done to the natural world, such as the deforestation of Borneo while spitting "I don't want your future/What did you have to gain?". All the while repeating the question in the title, confused and afraid of what has happened not only to the planet, but humanity's relationship with it.

'Watch Me', a highlight on 'Hopelessness', is a calculated and perfectly executed track which is equal parts humorous as it is unsettling. Comically describing the NSA as 'Daddy' in an almost psychosexual-Orwellian manner while it watches someone through their laptop; whether they're talking to their family online or watching pornography in their hotel room while an anonymous figure is capable of checking their medical records. Anohni drips with irony as she states "I know you love me/'Cuz you're always watching me." This dark humour continues into one of the most profound choruses to come out of pop music in the 21st century, where Anohni sarcastically thanks the surveillance state for "Protecting me from evil/Protecting me from terrorism/Protecting me from child-molesters." The genius of creating a chorus so catchy to sing along to, yet its content being so controversial and fringe makes one hesitant to join in is an exercise in self-surveillance and censorship. To have that attribute in what is essentially a pop track is a master-class in songwriting.

'Hopelessness' (which should have been the closing song of the album) is perhaps the most interesting piece, at least in terms of understanding Anohni's perspective on these far-reaching issues she plunges herself in to. This track explores the futility of the world we have allowed to be constructed around us; beginning from the more naturally-inclined manner of the human race before we pillaged it for finite resources in the contemporary. "I don't give a s**t what happens to you.../I've been taking more than I deserve". Anohni scrapes at the frustration of her and our collective inaction and selfishness before wailing "How did I become a virus?", likening humanity to a disease as we make Earth rot while the backbeat morphs into discordant, Arca-like territory. As the swelling subsides and the track reaches its end, she whimpers "Hopelessness/Hopeless-" her line is interrupted at the end of the track. The irrecoverable damage has been done and we are the dooming of ourselves.

'Hopelessness' is an incredibly tragic, unsettling and at times infuriating listen when compared to the reality of the world. It is ideologically consistent in its opposition to a patriarchal, capitalist conglomerate of government and corporate corruption, whose domination has made us subdued and accepting of their oppressive nature. Therefore this album may not be to everyone's taste due to the opinions that so explicitly shared throughout the album, or potentially due to the political opinions of the listener. As well as that, 'Hopelessness' isn't an album necessarily looking for answers or resolutions, and at times the startlingly blunt lyrics might be overwhelming or even insufferable for some to endure. However, the ability to use the guise of contemporary pop as a Trojan horse to invite the listener in, all the while bombarding them with political and global tragedy is one of the boldest statements an album has made in a long while. Depending on distribution and/or public reception, it could very well be the protest album of a generation.