22 year old Alex G's lo-fi melancholia takes shape once again on Domino-released Beach Music - his first album with a label this size, but his seventh to date. 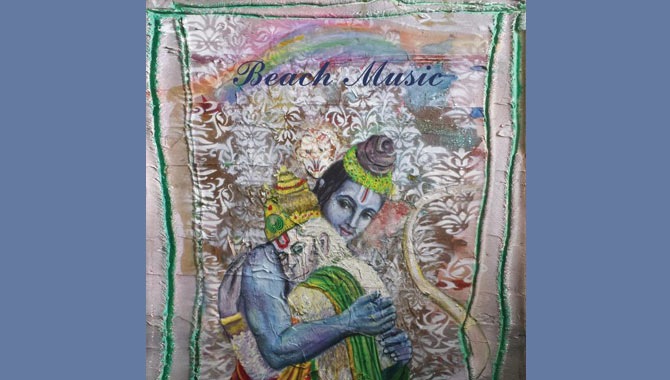 Although Alex G has been splashing around the internet for some years now, it wasn't until the release of his last album "DSU" that he won himself the attention of big-name media outlets, winning Album of the Year with Noisey, Consequence of Sound and Vogue. Prior to this, his cult following was garnished from a slew of self-released albums on his BandCamp page - two of which have been recently reissued.

"DSU"came together as a mix of catchy indie songs, with a darker, more experimental sentiment immersed within it. Beach Music sees Alex G embracing this side of his sound to an even greater extent, whilst maintaining a lot of the melodic tricks Alex G fans are used to."Beach Music" was announced back in August along with the video release of lead single "Bug" - a smart, twinkly indie rock track. "Bug" is a great example of the mysterious nostalgic quality Alex G's music evokes. The video sees two teens driving around, getting stoned and smooching in the sun.

Beach Music shares many of these melodic nuances that we've seen before.There are a few straight-up indie rock tunes on here, most notably "Kicker" and "Snot" which are packed with memorable riffs and great chord progressions. The same goes for "Walk", the album's instrumental interlude.There is also, however moments on the album where Alex branches out further from styles like this and explores new territory - "Salt" is a synth driven track with falsetto vocals, the album's moonlit, intimate scene, while "In Love" is a haunting jazz waltz, strikingly reminiscent of Chet Faker's "Almost Blue".

As with his other albums, Beach Music couples it's indie-rock gems with it's weirder, more experimental songs. His blending of styles and use of vocal distortion play a big role in shaping the narrative of the album - the use of these techniques often work to haunting and hypnotic ends. Alex G pushes this further with Beach Music, on which these characteristically varying vocal tracks represent temporary perspectives.

For example, of the album's later tracks, "Station" winds the energy down a few notches with a sparse guitar/vocal duet. Pitched-down backing vocals moan over the track as it seems to lose form completely and fall into the ambience. "Station" feels less like a cohesive song, but instead resting somewhere between that and a musical interlude or skit. Alex G demonstrates that he not only knows how to make great tracks, but highlights his attention to the album as a listening experience rather than just a set of tracks.

For a young man of 22 Alex G seems to have extensive knowledge of songwriting history and enough actual talent to use this knowledge to create his own style - blending the use of traditional methods with computer experimentation into a charming and unique production style, Alex has earnt himself "The Internet's Best Songwriter" title by various prominent blogs.

Alex G's music has managed to move quietly from the remote corners of BandCamp to being some of the most talked-about music around at the moment. This is quite the feat for a singer and multi-instrumentalist who's just turning 22. It's not just his knack for working out unforgettable indie-rock riffs but his experimentation that have seen him go from unknown to "prolific" in such a short space of time.