Monarchy - Around the Sun Album Review

Review of Around the Sun Album by Monarchy

London's dance scene gets a refreshing boost with the release of Around the Sun, the debut offering from Monarchy, popular Techno/House artists. New, dedicated techno music has been thin on the ground in recent years, so Monarchy have taken advantage of a lack of competition and broken their way onto the scene in a big way. They put their name into the history books forever in June 2010, broadcasting the first ever live show directly into space from Cape Canaveral, Florida. Monarchy have also remixed tracks by some very upmarket artists, such as Ellie Goulding and Lady GaGa, to get their proverbial foot in the door, and so their first studio release was very anticipated. Said debut album was released on July 11th 2011, and, on first listen, it lives up to its expectations.

Monarchy have a unique method of blending constant, band-esque lead vocals with soulful and uplifting, synth based pulses of music, and to be honest, it's really pleasant to listen to. It works on this album extremely well, and it's very good to hear a new take on the genre, which some could argue is tired and stagnated. Some house and dance music pulses very heavily and weighs a lot on the eardrums, eventually becoming an unpleasant experience for the listener. Not so with Around the Sun. It's uplifting, epic sounding dance music, and without the vocals, it could even pass for trance music. The vocal part of the music is ever at the forefront of it, it's constant, verse-to-chorus and back again singing, an unorthodox trait for dance music, which has always heavily focussed on the beats and synths. It's a refreshing change, one which makes the music much easier to listen to, and which makes the music itself much more accessible to a wider audience.

The only problem I would find with this album is its relevance to the scene that it aims at. Dance music is more often than not found within bars and clubs, and the absence of pulsating bass-lines and ear-throbbing punches might make it hard for this type of music to fit into that scene if it were ever to go into the mainstream. This might make it less popular with the masses. This could be a small problem though, as Monarchy have already played several open-air festivals and countless shows, including The Big Chill and at top venue XOYO. Overall, this album is a respectable and experimental first release from the ambitious Monarchy, an experiment that has paid off for them. It's a sensual, uplifting and trance inducing dance experience, and for what it is, I won't hesitate to give it a very good 7/10. 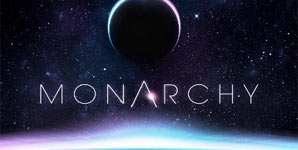