It would be hard to select just one aspect of Linkin Park's Saturday headline show that we loved above all others. We had treated the band's initial billing announcement with apprehension, even when it was announced that they'd be playing their seminal 2000 debut, Hybrid Theory, from start to finish. But after some of the mundane tosh they've come up with in recent years, was it really possible to revisit the glory days? The Californian nu-metal unit's set was a sleek beast, delivering Hybrid's crisp, electronically-tinged tracklist but bulking out the set to 25 songs with selected hits from their extensive discography as well as three new tracks from upcoming release The Hunting Party. Having explained in the preceding video "Road To Download" why they'd decided to honour the album, co-frontman Mike Shinoda said "This is a special night for us, we've never done this before" as the crowd bopped and headbanged like it was 2001. 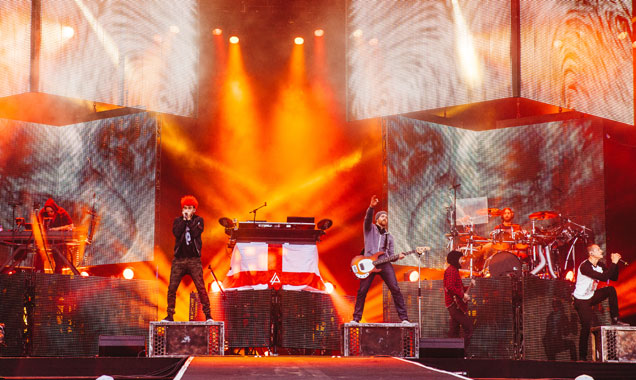 Linkin Park's Saturday Set Was The Clear "I Was There" Moment Of Download 2014.

10) Lighters Up For Aerosmith

The good folks over at Zippo had been making sure that no one was short of a lighter at DL2014, as evidenced by the sea of windproofs that were lifted into the air when Sunday closers Aerosmith played the aching ballad, 'Dream On.' Couples were snuggling and the tiny flames were twinkling as Steven Tyler tickled the ivories of a giant, white grand piano with a massive backdrop sign saying "ENGLAND" behind him. As Joe Perry's guitar solo pierced through chords and Tyler's lovelorn crooning, a shiver skittered down our spines. It may not have been metal riff madness, but it was a perfect end to a stellar weekend.