Despite Skindred having played Download five times and never having migrated to the festival's top billing, the Welsh reggae metal team were back for another bite of the apple. Debuting tracks from new album Kill The Power, Benji Webbe and co. gave another of their trademark energetic, involving and occasionally hilarious live shows. Looking dapper in a Union Jack suit, Webbe told the crowd to "F- off" when they didn't cheer loud enough, got everyone to crouch down on the floor à la Slipknot, and orchestrated a mass "Newport helicopter" session whereby the audience were ordered to take off their sodden shirts and whirl them round their heads in time to the music. Thousands of rock fans flicking their sweaty T shirts around in the air? Yeah, it was a pretty scene. The Download festival organisers really pushed for crowd safety this year by upping checks for glass bottles, deploying hundreds of eagle-eyed stewards in their high viz tabards and warning punters not to engage in that most primal of pastimes, moshing. The fest's big-wigs had also apparently instructed bands to neither incite such violence nor whip their crowds into a foamy-mouthed frenzy. Some bands, Bring Me The Horizon for example, ignored this warning with frontman Oli Sykes at one point politely requesting something to the tune of "I wanna see all you f***ers in the pits losing your f***ing minds." Whereas Killswitch Engage decided to exert a little social responsibility (wink, wink) and asked their loyal fans to "dance responsibly" to appease the DL gods before one particularly heavy breakdown. "Dance as responsibly as you can," said bearded frontman Jesse Leach with a glint in his eye. Oh, they did. 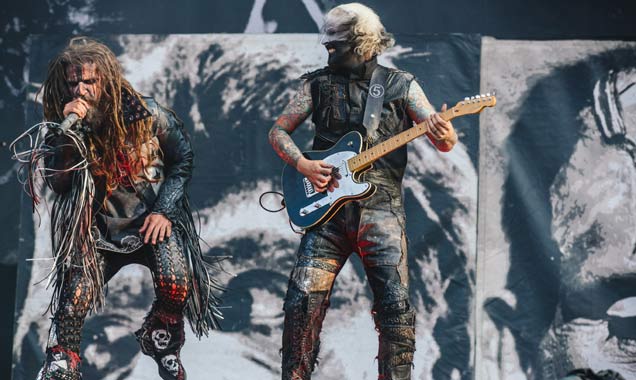 They Look Like They Smell Terrible But We Couldn't Tear Ourselves Away From Rob Zombie's Metal Horror Show.

One of the best and most unsettling acts we saw on the Friday, Rob Zombie, gave the kind of performance that gets under your skin and takes hold. Assembling his scarecrow-like band of eerily painted musicians, Zombie drove a dark and demonic machine of industrial metal through the heart of the Download festivities. As well as an impressive combination of a creepy stage set and haunting costumes, Zombie brought along his famous and enormous Nosferatu microphone which was swapped for an even bigger, even more terrifying six-armed skeleton mic halfway throught the set. Rob shook the mic as he sang; the hellish incarnation swaying ominously above the sea of awed supporters below. Spooky stuff, but will it catch on?

Next Page: Linkin Park relive history, and Aerosmith make it a night to remember.