"I felt like it was the only way I could release all the noise and cluttered emotions inside my head. It's a place where I can be alone and immerse myself in emotions that I don't really know how to handle in real life." These are the insightful words of Kyla La Grange on her songwriting, which is unsurprisingly haunting. This statement makes a lot of sense within her debut, 'Ashes.' By the sound of it, she really has poured her life and limb into this album. The Watford-raised singer/songwriter joins the ranks of other female artists with epic ideas for production and poignant pipes to match. Over the past year the likes of Lykki Li, Saint Saviour and Niki & The Dove have thrown something fresh to the generic 'female singer' stereotype. Kyla La Grange also follows the trend. 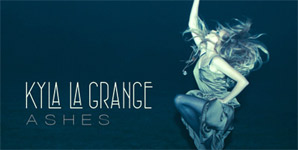 Produced at 123 studios in Shoreditch by Brett Shaw, 'Ashes' is a beautiful listen. Each of the eleven tracks are made up of the same components. Kyla's dynamic and uplifting voice is combined with ambitious production, creating an unreachable atmosphere. The structure and tone is similar to Clare Maguire's 2011 debut 'Light After Dark.' 'Been Better' and the last lingering section of 'To Be Torn' especially fit together with this comparison. Though these similar features are recognizable throughout the record, each seems to bear its on characteristic and story within its different instrumental surroundings. Thankfully Kyla La Grange has managed not to nose dive into that common hole of every track on a record 'merging' in to one with no definition.

'You burn my ears with your magic voice' and 'we'll draw in breaths like we don't have air' are some unusual lovesick phrases presented in previous single 'Vampire Smile.' Not your usual romancing expressions. Your ears pick up these snappy captions as you search for more unpredictable gifts of language. Though there is a certain naughty word that lies, showing some rugged heat to contrast with the soft, romantic barriers of 'Ashes.' 'Heavy Stone' and 'Courage' are particular foundations of these barriers with their folk feel. Opener 'Walk Through Walls' and last track 'Lambs' both have dramatic beats and high vocals that resemble the early energy of Florence and The Machine.

Kyla La Grange has created a spectacular debut, crafted around her terrific talents. Watch out all you notable 'alternative' female artists who've made your mark recently. Kyla is out to impress.