Review of Songs From Repo Chick Album by Kid Carpet

Making music that has, according to his website, formerly been described as 'kiddy disco punk', Kid Carpet (aka Ed Patrick) is a multi-instrumentalist a little different from the norm; his chosen sonic weapons are largely samplers, Casio keyboards and children's musical toys. The result? Treading the borderline between fun and irritating...

Kid Carpet's fourth album, entitled Songs From Repo Chick, opens with a 'Big Atomic Bomb', a repetitive loop of a music box sample of Tchaikovsky's theme from Swan Lake amidst a blend of electronic beats and crackling samples, followed by 'Chuck It Away', a brief, one minute forty second blast of electro pop-punk constructed of simple layers of samples. Again with layers of simple electronic sounds, 'On A Road' sounds honest lyrics akin to those of The Streets that are kind of sung spoken but all the same ingrain themselves into your head. There's also an element of urban poetic folk to the Kid Carpet blend, with the English-ness of Nizlopi but drenched in electronics and less of the folk idealism. Lyrically at least, this notion is further reiterated in 'Herd Of Cows' which sounds the repeated lyric 'there's a herd of cows running down the street in the city on a Saturday night' with a kind of rough punk feeling amongst Kid Carpet's trademark layers of simple electronic riffs. This punk feeling is then contrasted by 'The Golfers', a thirty-five second, slower moving chordal piece with iffy sounding tuning as a result of Kid Carpet's Fisher Price instrument collection. 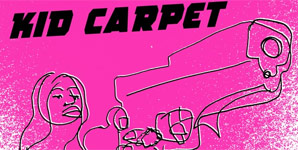 Later, 'Dancing Monkey' sounds a fuzzy dance feeling with a low distorted fuzzy riff looping throughout beneath spoken sung lyrics. The lyrics of the chorus then paraphrase the hymn 'Lord Of The Dance' to fit in with the 'Dancing Monkey' theme; irresistibly catchy regardless of its' lacking musical quality. 'What You Doing Here' has a stomping V-I bass part and noodling piano line that gives it a light-hearted jazzy kind of feel blended again with an honesty and English-ness that's reminiscent of Blur. The relatively short track lengths throughout Songs From Repo Chick are a good move from Kid Carpet as, although there is variety from track to track, the longer tracks themselves are repetitive and monotonous, formulaic and flat. Every now and again, however, brief tracks interject the irritating repetitive monotony of some of Kid Carpet's beat-driven tracks on this album; 'In The Garden', for example, sounds a slow moving chordal toy instrument accompaniment beneath spoken word lyrics of childhood pondering. 'Get A Job' then follows an electro synth-punk pop vibe and more of a frantic pace that's interjected with slower, funeral march-like snippits as choruses. With its largely unaccompanied spoken word all but for samples of card shuffling, 'Shuffle' sounds resemblance to the storytelling basis of Soweto Kinch's album 'A Life In The Day Of B19: Tales Of The Tower Block', but instead replaces the saxophone licks with electronic beats and riffs.

The albums' concluding tracks continue with much the same material as their predecessors and it has to be said, as a fourteen-track slog, Songs From Repo Chick begins to grate towards its' closing moments with its' bland repetition. The album does, however, leave one with the impression that in a live environment, Kid Carpet could be a completely different entity.