Junior Boys' single, 'Banana Ripple', was taken from their recent LP, 'It's All True', which was released on June 20th, 2011. The Canadian duo is set to release a 12'' that features remixes of Banana Ripple on September 26th, through Domino Records.

The video for Banana Ripple was directed by Rollo Jackson. Clocking in at just under ten minutes, the bouncy track accompanies abstract images of paint, a close up of an eye, brightly coloured ice cubes and a man buttoning up his shirt. It is a video that you probably won't forget in a hurry!

Jeremy Greenspan and Matt Didemus have released four albums to date: 'Last Exit', released in 2004; 'So This Is Goodbye', released in 2006; 'Begone Dull Care', released in 2009 and the aforementioned It's All True. Their upcoming 12'' will feature remixes from Stay+ (formerly known as Christian Aids) and house duo Two Bears. 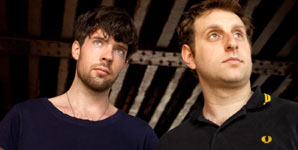