For his latest adventure, James Bond mixes the personal drama of Skyfall with the vintage globe-hopping action of the previous 23 movies. The result is an epic thriller packed with exhilarating set-pieces and dark surprises. Again directed by Sam Mendes, the film has a meaty tone from the astounding pre-titles sequence in Mexico City to the climax in North African. And it takes its time to build the suspense, mystery and drama in ways few blockbusters bother to do.

After the calamitous events at Skyfall, Bond (Daniel Craig) has gone rogue, following a videotaped message from his late boss (Judi Dench) to track a villain to Mexico, then continuing to Rome, where he woos the grieving widow (Monica Bellucci). Pursued by relentless goon Mr Hinx (Dave Bautista), he travels onward to Austria, he confronts an old nemesis (Jesper Christiansen), whose daughter Madeleine (Lea Seydoux) joins Bond to travel to Morocco to face the shady top boss Oberhauser (Christoph Waltz) in his secret lair. Meanwhile in London, the new M (Ralph Fiennes) is fighting to to keep MI6 in operation as new boss C (Andrew Scott) works to restructure British security as part of a global conglomerate.

Mendes stages this on a massive scale, with huge action sequences that are never rushed or choppy, beautifully shot by ace cinematographer Hoyte van Hoytema. And it's all underpinned by darker personal drama between the characters, so every sequence features thoughtful conversation, witty banter, more clues to the larger mystery and then thrilling action. And as 007 hops from location to location filling in the bigger picture, the film feels like all of the classic Bond movies rolled into one.

Picking up after the climactic battle at his childhood home of Skyfall Lodge and the villainous attacks on MI6 headquarters, James Bond (Daniel Craig) is ready to face his greatest adversary. With MI6 discovering that he has a secret from his childhood, he is sent to on a mission to track down an old friend, now a high-ranking official in the villainous organisation. Suspecting the involvement of Mr. White (Jesper Christensen), a prominent member of the once-powerful Quantum, Bond soon discovers that he is about to go head-to-head with a more powerful, more dangerous group: SPECTRE (Special Executive for Counter-intelligence, Terrorism, Revenge and Extortion), and its illusive and mysterious leader (Christoph Waltz).

Veronika Gronnegaard was an eccentric artist whose wealth brought her a sprawling manor in which her four children grew up. Many years later, all family members are estranged from each other and lead very different lives, but they are forced to re-unite when it emerges that Veronica has died. There is much tension during funeral proceedings, with each of her offspring eager to know who has inherited the house, rather than mourning their dear old mother. However, the resulting last will and testament presents a request that none of them could've imagined: that she would leave her magnificent home to her biological daughter Signe, whom she had adopted as a child and who still lives locally with her partner. The Gronnegaard children will do anything to make sure the mansion is returned to one of them, but what can be done with such an unambiguous request?

In a grand castle located in the beautiful countryside, Justine and Michael have married. They enter their reception to cheers and applause and everyone agrees that Justine has never looked happier or more beautiful. The newlyweds enjoy their new marital status and the company of their guests, which include Justine's sister Claire and her husband, John, who organised and paid for the entire wedding.

By Rob Blackwelder
OK
Layers of riveting intrigue build toward a finale weigheddown with logistical loopholes in "The Interpreter," a politicalthriller about an assassination plot overheard by a translator (NicoleKidman) at the United Nations. 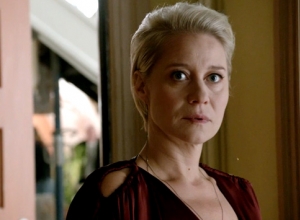 Veronika Gronnegaard was an eccentric artist whose wealth brought her a sprawling manor in which...

Layers of riveting intrigue build toward a finale weigheddown with logistical loopholes in "The Interpreter,"...