Ploughing several shades of 'woman as the devil' imagery, 'Blunderbuss' is, essentially, Jack White 2.0, the artist in hyper-colour, extending several dimensions beyond the Jack White that we have seen before. As White's career has progressed beyond The White Stripes, through The Raconteurs and the Dead Weather; he continues to unravel before our eyes - something he seems to acknowledge himself on the inward-looking 'Hip (Eponymous) Poor Boy' with the line "you'll be watching me, girl / Taking over the world / Let the stripes unfurl." 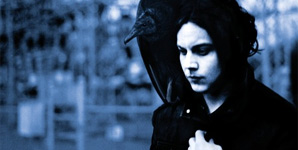 Whether or not that 'girl' is his ex-wife, Karen Elson, his former drummer, Meg or some other female being entirely, Jack seems to be using 'Blunderbuss' to fight the flames ignited by the women in his life, whether they be flames of rage, despair or desire. 'Freedom at 21' begins with drums that sound like a field recording of a distant battlefield, wiry and complex; the best of Carla Azar's work on the album. With a guitar line that sounds not dissimilar to a truncated version of the 'Seven Nation Army' riff, Jack starts to spit the lyrics, "cut off the bottoms of my feet / made me walk on salt . Smile on her face / she does what she wants to me." With a funk-falsetto, buoyed by the enticing vibrato on his voice, it's one of the strongest performances that he gives.

This is Jack White untethered, freed from the constraints of having a band to consider and left to wander where he pleases. At times, this results in a touch of lyrical self-indulgence - 'Hip (Eponymous) Poor Boy' being a case in point; a paean to his own work ethic - but at others, he seems to draw on influences that are harder to detect in some of his earlier work. Production-wise, the garage-fuzz of the White Stripes got stripped back years ago, but nonetheless, seems crystalline here. Vocally, he's playful; on Blunderbuss, coming across as an over-emotional, young Roger Daltrey, his voice quivering and wavering over a baroque backing. In amongst the usual influence of American roots that you would expect from this historical plunderer, seep more than just this British influence. The melody of 'Hip (Eponymous) Poor Boy' recalls the Kinks, readily, whilst the moody production of 'On and On and On' nods to early '70s Pink Floyd.

The boldest tracks on 'Blunderbuss,' though, are those where he's mining his native past. 'Love Interruption,' brief, powerful and bolstered by the razor-sharp vocals of Ruby Amanfu, is a sub-3-minute blast, a statement of intent. Delicately bluesy, the impassioned refrain of "I won't let love disrupt, corrupt or interrupt me" cuts through any sense of fun that Blunderbuss may have created thus far and bleeds pure heartache. 'Trash Tongue Talker' segues so neatly from Jack's cover of Rudolph Toombs' doo-wop number 'I'm Shakin'' you have to scan back to check for a track-break.

With the freedom to extend his musical tendrils, 'Blunderbuss' could well be Jack White's finest work to date. There's a depth of character that he's never quite managed to convey until now and a musical range that he's never managed to encapsulate in one outfit. He has all the grace and rage of an eloquent teenager trying to figure out the human condition, and the opposite sex and his fans had better hope he never quite gets a grasp on either, because the internal monologue makes for far too interesting a soundtrack.