I Am Arrows - Sun Comes Up Again Album Review

Review of Sun Comes Up Again Album by I Am Arrows

It takes a brave man to leave one of Britain's most successful bands, but that is exactly what former Razorlight drummer Andy Burrows did in 2009, five yeas and three albums after joining the band. Now performing under the name I Am Arrows, this debut album is supported with a September headline tour, as well as a support slot with Muse.

Whilst the precise details behind Burrows' departure from Razorlight may never be publicly known, a listen to 'Sun Comes Up Again' certainly signals that creative differences may well have been a factor. There are certainly no rock anthems such as 'Golden Touch' or 'In The Morning', but instead a more subdued approach which results in a mature pop record. With a gentle bounce and quirky sound, 'Nun' is an encapsulating introduction and built upon by 'Green Grass', which apes Fun Lovin' Criminals at their smoothest. The beautiful and breezy duo of 'Far Enough Away' and 'No Wonder' proove very listenable, while 'The Us' is a particular highlight of lush melody and glorious soundscape. Unafraid to mix his palette, Burrows adds a hint of electro on 'Another Picture Of You', but even when he turns to sadder emotions he produces a compelling listen. 'Hurricane' is laced with a bitterness that results in one of the best tracks, whilst 'Battles For Hearts And Minds' disguises hurt beneath an uplifting tune. He may work under a psuedonym of questionable grammer, but there's no doubting the ability of Burrows as a solo artist. Razorlight's loss is very much the music world's gain. 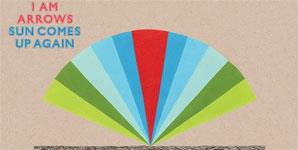 I Am Arrows - Sun Comes Up Again I Am Arrows - Green Grass Video