Review of Wine, Women and Song Album by Hey Monea!

The genesis of Hey Monea! can be traced to 2005 when brothers Danny and Nate Monea stepped outside of their religious upbringing to pursue a passion for rock. Though this record was originally released in 2009, attention to the group has been stirred after they won a global competition and found themselves on the undercard to Bruce Springsteen at Hard Rock Calling. 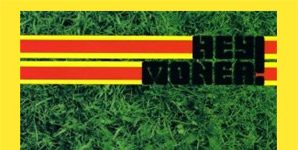 Opening track 'Until Then' introduces HM! very much in the pop-punk mould - bouncy guitars and a bouncy chorus - without delivering much substance and the same can be said of 'Stay For The Summer' on which a likeness to The Academy Is. can be found. This turns out to be a red-herring though, with the swooning 'Ballad Of Moonbeam Swinger' and country-tinged 'Caroline' showing that the band have a knack for a catchy melody across different genres. The intensity of 'Selling My Soul' and laidback stroll of 'Paper Moon' couldn't be much further apart, yet both are enjoyable tunes and give a great balance to this mini-album. Certainly worth investigating, religion's loss is very much music's gain in the case of Hey Monea!