Innovative 'circus swing' band Gabby Young & Other Animals release their new single 'In Your Head' on June 11th 2012 along with their second album 'The Band Called Out For More' on the same day.

A comedic vaudevillian style interactive animation has been released as the video for the uplifting track. Amongst the chaotic circus imagery here there and everywhere, the video allows you to choose from three different endings by selecting a different animal to be 'saved'. It was produced by front-woman Gabby's friend Georgina Hurcombe (Lovelove Films). Gabby agrees that it could possibly be interpreted as a metaphor for the music industry.

The track is written by herself and her partner (and producer) Stephen Ellis. 'My sound's matured', she says. 'I never say it's different but I've honed my craft.'

The band's debut album, 'We're all In This Together', was positively received by UK publications including The Guardian, The Sunday Times and the London Evening Standard. Their biggest performance so far was their headlining concert at KOKO in London in October last year.

They are due to appear at several UK festivals in 2012 including Abbots Ripton's Secret Garden Party, Wales' Green Man festival, Standon Calling and Northamptonshire's Shambala festival. 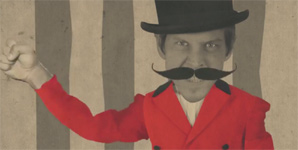