Review of Elements Of Truth Album by Empirical

'Gathering knowledge through observation and experimentation', the dictionary definition of Empirical, is central to the bands' musical blend; they're a jazz collective right on the forefront of innovation and the resulting third full length album is captivating from start to end. 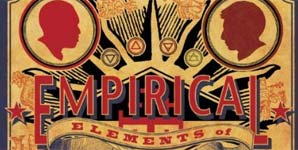 'Say What You Mean, Mean What You Say' opens Elements Of Truth in dramatic suspense, with rapidly undulating piano underpinned by low growling bowed double bass, over which a distinct repeated rhythmic vibraphone motive kicks in around the one minute forty mark and Empirical ease into slightly uncomfortable polyphony. Moving on, piano; vibes and sax gesture over the solid drum and bass back line; it's quite intense and never really settles into a distinctive melody as such but is instead more like snapshots of frenzied instrumental conversation that occasionally resolve to moments of beauty before taking off again. In the album's opening track, Empirical offer an interesting mix of mesmerising Reich-like minimalism, intense prog rock, and fast moving virtuosic bebop gestures, particularly from Nathaniel Facey's alto saxophone. 'Yin & Yang' similarly opens with a dramatic expressive rubato piano introduction before the plucked bass groove takes over, soon joined by the drums in a partnership more like we'd expect from jazz. Its alto sax and vibes that then unfold the melody over the solid base and the piece gradually builds in intensity, recapitulating the original melodic theme before pausing to an interception of vibraphone and double bass polyphony which oozes calmly in contrast to the progressively intensifying busy-ness that preceded. Facey's alto saxophone also joins the calm blend to sound a vibrato-heavy melody, which is followed by a tame and rumbling drum solo beneath meandering piano chords; Fogel and Forbes crescendo together with parts becoming busier, and again the intensity begins to build before fading out to a single sax note which concludes the track.

'Into The Grill' opens steadily, with the entire ensemble moving essentially in homophony before the faster, busier polyphonic groove kicks in. Instruments sensitively and subtly echo each other as motives and gestures are effortlessly passed around the band. Lewis Wright impressively negotiates the vibraphone with exactly the precision, speed and dexterity of each of his band mates; outstanding musicality. Strummed piano chords (strings on the inside of the grand) together with high pitched sax gestures and warming vibraphone set a spacey and atmospheric, if slightly dissonant, ambience to the opening of 'Out Of Sight, Out Of Mind Part 1'. Gradually, the piano and vibes parts become more motivated in accompaniment to the sax, with the pianist returning to the keys to build like a Reich-esque minimal work. It remains a trio until around the three minute mark when the full band join in a blend that's much more recognisable as jazz, though again formed of repeated motives and the piece breaks into quite a different blend; together and rich.

With a walking bass line beneath a tuneful sax and vibe melody, flanked by solid piano and kit parts, 'Cosmos (for Carl Sagan)' opens in a more traditional blend, though this is short-lived, giving way again to a spacey explorational passage akin to the tracks title; dying out to complete silence then returning to a more typical jazz sound which showcases Empirical's ability to bounce off and complement each other perfectly with their various musical gestures. Slow moving and glissando-ridden sax and bowed bass sound amongst piano and vibraphone harmony and a subtle brushed drum beat before a busy driving groove kicks in unexpectedly to contrast the opening to 'An Ambiguous State Of Mind', with something of an all guns blazing frenzy. A drum-flanked sax solo then triggers another change of feel progressing to an intense and anxious blend. To conclude the album, fading in from exactly where it's part one predecessor faded out, 'Out Of Sight, Out Of Mind Part 2' continues with the rich and oozing blend for all of two minutes at which point another fade out concludes Elements Of Truth with silence.

The verdict: a fantastic album of the kind of intricate and complex progressive jazz that completely entrances. Enticing, interesting and captivating. Just superb.