Ellen And The Escapades - All The Crooked Scene Album Review

Preconceived ideas are generally not a good idea and very often wide of the mark. Formulating an opinion before the facts have been heard can be a dangerous and foolish thing to do. To have an open mind and look at something with a fresh perspective is usually always a better idea. I know that and am normally not prone to such hastiness, however. Before hearing the debut album from Ellen And The Escapades I had thought it was going to quite a light affair of breezy happy-go-lucky ditties that although pleasant enough wouldn't necessarily be that interesting, or good. How wrong I was. Whilst 'All The Crooked Scenes' may not be an intellectual heavy weight of Nietzsche proportions is it is no casual throw away insignificance either. The twelve songs on Ellen's new album are all wonderfully worked compositions that showcase her and her band extremely well. 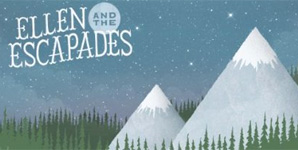 Having won over many festival crowds, toured extensively, released a string of singles, one EP' and been blessed with some great feedback and flattering airplay E&TE's star is definitely in the ascension. In the ensuing three years since they formed the Leeds based quintet have certainly honed their significant skills to deliver up a completely captivating first album that has charm and character in abundance. The soulful piano lead 'Run' starts the album off brilliantly. Ellen's husky vocal sounds oddly (as she's from Leeds) like that of Alison Sudol (A Fine Frenzy) but that is by no means a bad thing. Her emotive, gentle and softly sensual tones caress the song with a tenderness and beauty as it plays out to the organ drenched finale. 'Without You', the band's first single from 2009, then whips up the pace into a jamboree of toe-tapping, harmonica and snare spliced revelry. Slipping into more of a Country style for 'This Ace I've Burned' Ellen once again makes good seem effortless and easy singing with a mellow calmness that could sooth any mood.

The quality of 'All The Crooked Scenes' rarely dips throughout the album, each of the songs can stand individual scrutiny and there a certainly no 'fillers'. That said, 'I'll Keep You Warm' heads up a trio of songs that set the benchmark on the album. Each is a carefully crafted tale soundtracked by some great musicianship. The title track, and first single released from this album, is rousing, cinematic affair that kicks along at a blinding pace. The instrumentation is deftly handled and the breakdown is superbly done. 'When The Tide Creeps In', sees Ellen alternate from powerful to considered vocal as the tune builds and breaks to create some stirring folk. Further down the line, 'Praying On Your Mind', bounces along to a bawdy, Mumford like, barn beat before Ellen goes through some emotional turmoil on 'Coming Back Home'. Her voice cuts through so crisply for a spine tingling performance on 'Yours To Keep' and wrapping up the dozen tracks 'Cast' undulates and whirls around to sign off, with hints of Fleetwood Mac, in some style.

'All The Crooked Scenes' from Ellen And The Escapades is a fabulous debut album with many hidden and unexpected treasures. It's never one dimensional and keeps your attention throughout. The songs differ enough to make them interesting and individual whilst Ellen's sultry singing voice and the bands skill tie the package all together very nicely indeed. One of the best surprises of the year so far.

Ellen And The Escapades - All The Crooked Scene